Facebook offers a wide array of targeting methods for advertisers. On one hand, the sheer volume of options can be a blessing since it means marketers can get more granular with targeting on Facebook than they can anywhere else. If you already know exactly who you want to target, it’s a buffet of riches.

White Paper
The First-Party Data Advantage: How to Use Interactive Content to Future-Proof Your Marketing Performance
First-party data will be a major differentiator in the very near future. Learn how to build a full-funnel data strategy and unlock the competitive advantage.
Download White Paper

For marketers who are less sure, the large number of options probably feels more like a curse, since it’s very easy to waste ad spend testing various targeting combinations in an attempt to arrive at the best-performing audience segments.

Facebook lookalike audiences allow marketers to take advantage of the incredible amount of data Facebook has on hand to arrive at those best-performing audiences without excessive trial and error.

What is a Lookalike Audience?

Lookalike audience targeting is based on the idea that people who are most similar to your existing users are most likely to convert. You literally load a list of your best customers (called a source list) into Facebook and let the algorithm take the wheel to find new people who mirror that group.

Facebook’s algorithm for building Lookalike audiences sifts through the data it has on your source audience to find patterns between the source audience and the overall Facebook user base.

This algorithm takes into account many facets of information that Facebook collects, information that transcends simple user input data and includes inferred attributes. Facebook doesn’t go into detail about what exactly is included in its Lookalike modeling, but it’s fairly safe to assume it includes likes, post interactions, and other observed online behaviors of a given source audience.

Facebook then extrapolates patterns to build a larger Lookalike audience of users that most resemble the patterns identified in the source audience. Fair warning: since the Lookalike algorithm is mostly black box, you have to give up some control over who ends up in your target audience, because you don’t explicitly choose the targeting parameters for each audience.

We’ve spent millions of dollars testing different targeting methods on Facebook and found that, for most companies doing performance-driven advertising, Lookalike audience targeting works far better than anything else both in terms of ROI (efficiency) and audience reach (scalability).

The first step in building a Lookalike is to set up a source audience, the set of people you want the audience for your campaign to resemble.

To do this, first create a custom audience. 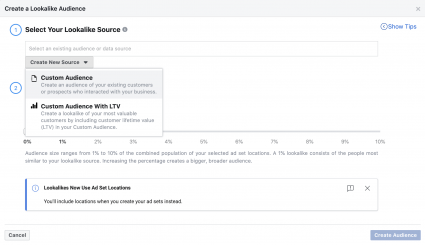 You can build this audience by uploading your database of customers, or on the basis of traffic to your website or app. 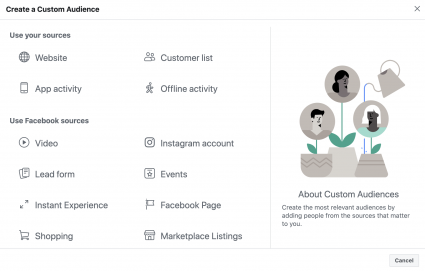 Keep in mind that your custom audience needs to include more than 100 people from the same country who have Facebook accounts that match the uploaded data (see below for an explanation of match rates) to serve as the basis of a Lookalike.

Facebook will get to work crunching data to find the users most similar to your source audience. Keep in mind that it could take anywhere from 6 to 24 hours for your Lookalike audiences to be created, and will refresh every 3 to 7 days as long as you’re targeting ads to it. It’s also worth noting that you don’t have to wait until the Lookalike audience is created to begin ad targeting.

While the process of setting up a Lookalike audience is pretty simple, there are some key strategies that can help maximize results with Lookalikes.

The first thing to decide is where to source the people for your source audience. As previously discussed, there are a few ways to do this: you can upload a customer list of email addresses or phone numbers, build a website custom audience (WCA) based on a Facebook pixel that tracks a user’s behavior on your website, build an audience using events in your mobile app (including Instagram), or build an audience using fans of your page

Typically, the match rates for B2C companies are usually higher than for B2B – we’ve seen as high as 95% match rates in the former case and as low as 20% in the latter. And as mentioned before, you need at least 100 customers who do match to build a viable source audience.

Using the Facebook pixel or mobile app events as a source for your audience has both advantages and disadvantages when compared with using a customer list. On the plus side, an audience based on the Facebook pixel or app events will update your seed audience automatically. It also allows you to specifically define the event you count as a conversion, whether that be an actual purchase/subscription or some event higher in the funnel.

But a major drawback of using the pixel or app events as your source is that it will only capture customer information after it’s built into your site, meaning it will take some time to build an audience if you don’t already have a pixel on your site or mobile app (depending on your sales volume). So if you don’t have any history of advertising on Facebook, using the pixel or app events to build your audience might not be a viable option at first.

The next thing to think about is how large you want your seed audience to be. As mentioned before, the minimum size is 100, but you should aim for much more than that. Facebook will be able to build a more similar and higher quality Lookalike audience if you feed it more data points.

But too many data points can actually lead to pattern degradation. Facebook identifies the optimal audience size as 10,000 – 50,000, but we have had greater success with higher quality audiences in the 2,000-5,000 range.

You might think that you should just create a master list of all of your customer email addresses and phone numbers, use it as your seed audience, and be done with it, but you’d actually be leaving a lot on the table. Quality is just as important as quantity when it comes to seed audiences, and segmenting can help you achieve both higher quality audiences and greater reach.

For example, it’s common for the top 20% of a software company’s users to be responsible for 80% of total revenue. In this case, it would be a good idea to create a Lookalike audience based on the top 20% of users (as opposed to creating a general audience based on all users). Then you’ll be specifically targeting people who look the most like top customers—people who are likely to not only convert at a higher rate, but to have higher lifetime value (LTV).

Segmenting by lifetime value, average order value, and other indicators of customer quality is important when building seed audiences. You can allocate larger budgets and place higher bids for more valuable audiences, and proportionally less for segments that drive less revenue, which lets you optimize your cost per acquisition relative to user value.

Once you have your source audiences planned out, the next decision to make is whether you want to optimize for similarity or reach. Facebook allows you to choose a sliding scale of similarity from 1% to 10% when building Lookalike audiences.

The percentage chosen indicates the portion of Facebook users who are most similar to your source audience, expressed as a percentage of total Facebook population (by country). A 1% Lookalike in the U.S., for example, typically has a reach of about 2 million people (20 million for a 10% Lookalike). Obviously, the lowest percentage audiences have the lowest reach, but they also have the highest degree of similarity to your seed audience.

Optimizing for similarity and reach takes some dialing in and you have to find the right balance for your business. When you’re mapping out your Lookalike strategy, always start with a 1% audience since it’s going to be the most relevant. Build towards higher percentage Lookalikes from there as each audience meets your efficiency goals.

Because Lookalike audiences are so large, there’s a good chance that the same Facebook users will be in several different audiences, and you don’t want to unintentionally target the same user with more than one campaign or you’ll end up bidding against yourself.

Limited population makes audience overlap inevitable. This can happen when you create multiple Lookalikes from similar source audiences. While segmenting source audiences this way can give you greater reach than lumping them together, it’s important to note that some of this effect will be canceled out by audience overlap. You can see how much overlap exists between audiences using the Facebook Audience Overlap Tool.

The same idea applies when you are using incremental percentage audiences – a 2% audience also includes the people that are in the 1% audience, so make sure to exclude the 1% audience so you will get the marginal reach of the 2% audience.

While it’s common practice to tier Lookalikes on the basis of similarity, it’s also important to do so based on the quality of a source audience. We recommend establishing a hierarchy of Lookalike audience quality so that each subsequent audience after the initial audience is excluded from the ad set targeting the prior audience. This allows you to target each new audience on its own merit without competing with the audiences you know to be of higher quality. For example, if you have a Lookalike based on people who have completed registrations on your site, it’s important to exclude the Lookalike of paying customers (higher quality).

A neat thing about audience exclusions is that they allow you to see how effective your source audience segmentation was, which can give you an idea of how much opportunity there might be in further segmentation. However, it’s important to remember that at some point your new Lookalikes will start having less and less marginal reach due to audience overlap.

Facebook ad targeting has evolved significantly since the ad platform was introduced. While conventional performance marketing tells us it’s best to define and segment as much as possible to optimize at the most granular level, Facebook Lookalike audiences challenge that assumption.

The tradeoff is less visibility and control for more audience relevance and scale. For performance marketers looking to eke out every bit of efficiency possible, this can be tough to swallow. Even while using Lookalike audiences, we still recommend relying on segmentation to boost performance further.

Lookalike audiences are a great way to scale Facebook advertising much more efficiently and quickly than manually finding and testing various targeting combinations.

Learn more about customer LTV and customer-centric modeling from a true expert in our on demand event featuring Wharton professor and Theta Equity Founder Peter Fader.