Creative optimization is one of the most important aspects of scalable Facebook advertising. Even small variations in image and copy can have a dramatic effect on click-through rates, cost per click, and down-funnel conversion rates.

One area of creative optimization that’s often ignored—but can lead to significant performance improvements—is post engagement: the comments, likes, and shares that a Facebook ad accumulates when shown to a target audience.

Social media is always changing. Check out Brand Social Media 2020: From Pay-to-Play Back to Real Community Building to learn how Facebook is changing—and how to stay ahead.
READ MORE

Post engagements act as social proof for other prospective customers seeing the ad, and they can play an important role in getting people to click on your ad and convert. They also tell Facebook that your ad is relevant to its audience, which leads to lower costs.

Below are two identical newsfeed ads: which one is more appealing? 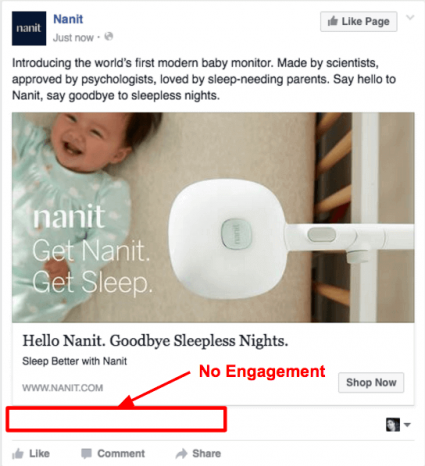 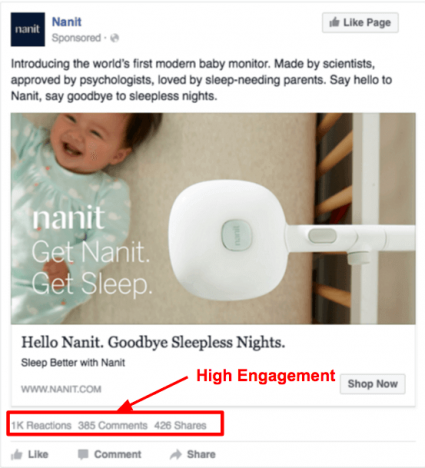 To understand why social proof matters, you first need to understand how Facebook’s ad auction works. Facebook takes two factors into consideration when determining what ad to show to an audience and how much that advertiser will pay. Those two factors are maximum bid amount and relevance score (the combination of estimated action rates and ad quality).

If you and another advertiser are targeting the same audience with the same bid, but your ad has a higher relevance score, then your ad will win more ad auctions and you’ll pay a lower cost for showing up. High relevance scores lead to more ad delivery and lower CPMs (cost per thousand impressions), which translate into higher conversion volume and lower customer acquisition costs.

Post engagements have a dual impact on relevance score: the engagements themselves are considered positive feedback, and when users see an ad with high engagement, they’re much more likely to take notice and engage with the ad themselves. This, in turn, leads to higher click-through rates, which also contribute to higher relevance scores.

Dark posts, or “unpublished page posts” as Facebook officially calls them, are the page posts used for newsfeed ads. They are identical to a public page post on a Facebook page, except they aren’t actually displayed on a Facebook page and are used solely for ads. That’s how companies can run Facebook ads without saturating their public Facebook pages with promotional posts.

To create a standard newsfeed ad, go into an ad set in Facebook Ads Manager and click the “create ad” button. Once you’ve created the ad, Facebook automatically generates an “unpublished page post” (which you can see under the “page post” section of the Facebook ads platform). Each time you create a new ad in a different ad set or campaign, it creates a separate dark post, even if the ad creative is exactly the same.

For example, say you want to launch the same creative against two different audiences. You’d have to target Audience A in one ad set and Audience B in another, and so you’d need to create two separate ads (and two separate, automatically created dark posts) – one for each ad set. Whatever engagement you earn from Audience A wouldn’t be visible on the other ad served to Audience B, and vice versa.

Since each standard ad creates a different dark post, the social proof from each audience will accumulate only on the ad being shown to that specific audience, which is not optimal if you’re trying to maximize relevance score. This is where creating a manual dark post becomes useful – because it allows you to do exactly that.

To create a dark post, first go into the Ads Manager menu in the top left next to the Facebook icon. Hover over “All Tools” and you will see an expanded menu. Select the “Page Posts” option in “Create & Manage.” 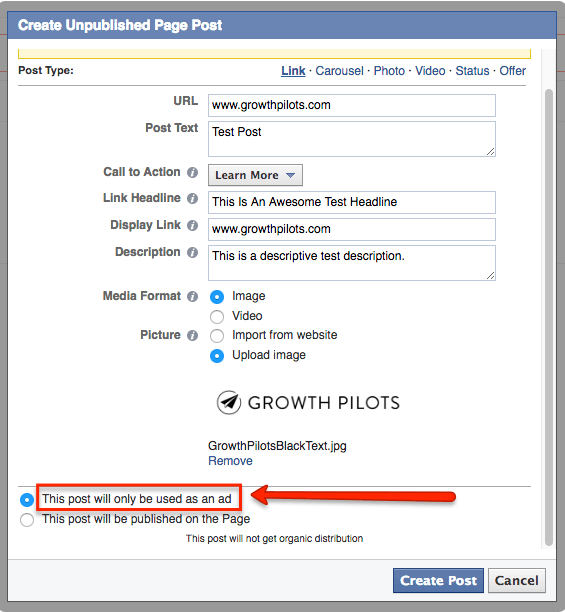 Once you’ve chosen the copy, URL, and image for your dark post ad, you’ll want to select the “This post will only be used as an ad” option above to prevent the dark post from showing up on your business’s Facebook Page, as indicated by the red arrow above.
After hitting “Create Post”, you will see your new ad in the page post manager, along with a post ID. This ID will be necessary to use your dark post in an ad, so make sure and copy it.

Next, create an ad using your dark post. Assuming you’ve already created a campaign and an ad set where you want to place your ad, all you have to do is create a new ad within the appropriate ad set. In the ad creation window click the option to “use existing post” and enter the dark post ID saved from earlier. This will upload your copy, URL, and image to the ad.

You can use the same dark post for as many ads as you like by entering its post id into the “Use Existing Post” tab of the ad creation window. To do this at scale, use Power Editor and Excel to create ads using the same dark posts and apply them across your entire account.

Instead of letting Facebook automatically generate a new dark post every time you use the same ad for a different audience, bidding strategy, or ad placement, manually creating your own dark post forces Facebook to use the same post across your relevant ad sets and campaigns. This will consolidate social proof across different ad sets and campaigns, so your separate target audiences all engage with the same ad. Here’s a diagram of how this works. 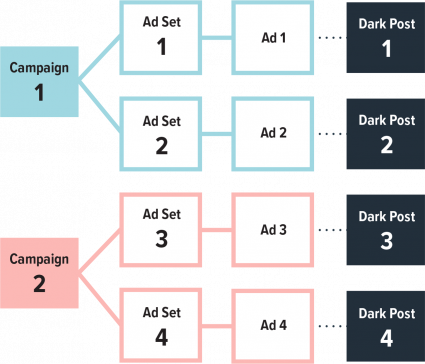 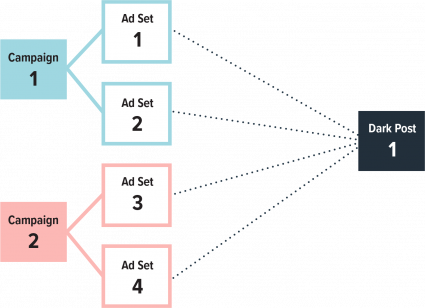 How Much Do Dark Posts Really Help?

Dark posts not only improve performance but also make it much easier to manage ads. For example, suppose you have 5 campaigns in an account with 10 ad sets containing 5 ads each. In that account you’d have to moderate 250 separate ads distributed across 50 different ad sets using standard ads.

If you used manual dark posts to create your ads instead, you’d only have to moderate the same five dark posts that you’ve utilized in all 50 of your ad sets. This will make it much easier to monitor and respond to comments, which is an aspect of Facebook advertising that is often overlooked.

Manual dark posts outperform standard Facebook newsfeed ads and make ad management easier. To test this tactic yourself to see what kind of performance boost you can achieve by consolidating social proof.

Ready to learn more about forging real connections with your customers on social media? Check out our white paper on Brand Social Media 2020: From Pay-to-Play Back to Real Community Building.

Everything You Need To Know About Facebook Stories Ads

How To Increase Your Organic Facebook Reach The Right Way