For B2B SaaS companies, conventional wisdom says that Facebook advertising is not a viable customer acquisition channel. This probably springs from a misconception: that people on Facebook are either not business users or not in a “business” mindset when using Facebook.

But you’re missing a lot of opportunities if you are bypassing Facebook. One of the keys to success is leveraging Facebook’s awesome power to target the right people for your brand.

Audience building is a critical aspect of Facebook advertising. Audiences allow you to target prospects in different stages of your funnel with a different ad or message. Audience building also allows you to segment your existing customer base into tiers based on quality and use those audiences to find new prospects.

Audience targeting on Facebook can be separated into two general categories: prospecting and remarketing. Each category requires a different approach.

Prospecting audiences are audiences who are brand new to your marketing funnel and have not yet visited your website or interacted with your content. Let’s dig into the most effective methods to reach new customer prospects on Facebook.

The Facebook Lookalike algorithm allows you to reach a large audience that Facebook determines is similar to a smaller source audience that you provide. It’s an extremely effective targeting mechanism.

Lookalike Audiences are typically the best performing prospecting audiences on Facebook if you’re using a source audience that strikes the right balance of quality and size.

In general, the best way to create an optimal source audience for a B2B SaaS company is a CRM list of paying customers. Going a step further, using only the highest LTV customers will help Facebook find the best profiles.

It’s important to use an optimal source audience size in order to generate a qualified Lookalike Audience. You need a minimum seed audience of 100 members to create a Lookalike, but in our experience the optimal range to aim for is 2,000 – 5,000 of the best audience members possible. Outside of this range, the Facebook algorithm can have too many or too few data points to build a strong enough pattern to create a highly qualified Lookalike Audience.

You should also remember that source audiences for B2B SaaS companies based on non-Facebook Pixel data, such as email addresses or phone numbers, are more difficult for Facebook to match, because most B2B points of contact use their work email addresses and phone numbers, which people don’t commonly add to their Facebook profile. You will need to use a larger source audience to achieve the 2,000 – 5,000 range of matched audience members.

3rd party audience targeting is another way to find a highly qualified audience for a B2B SaaS product. 3rd party audiences come from companies like Acxiom, Datalogix, Experian, and TransUnion, which provide targeting based on job position, company size, vertical and other key business traits.

Behavior targeting under the “B2B” targeting options will also allow you to target job role, company size, industry, and seniority based on Facebook data.  But 3rd party audiences tend to be more qualified than those built on self-reported job data from Facebook (the opposite is true of LinkedIn, where self-reported job title, position, company, vertical, etc. is often much more accurate). 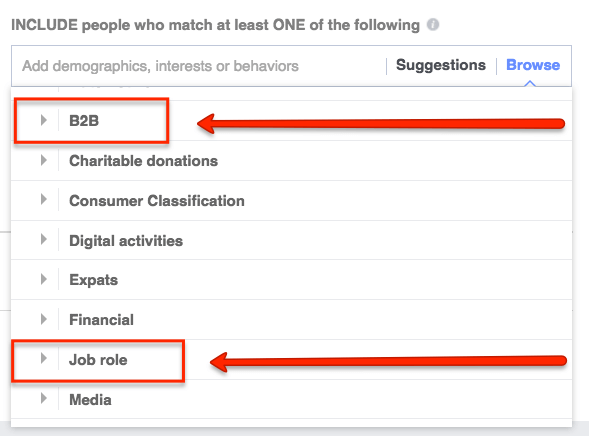 Note that the 3rd party audiences tend to be more qualified than those built on self-reported job data from Facebook (the opposite is true of LinkedIn, where self-reported job title, position, company, vertical, etc. is often much more accurate).

Beyond this, there are broader and less qualified options like interest targeting, but it’s generally best to test these only after the above targeting options have been exhausted.

There are also broader and less qualified options like interest targeting, but it’s generally best to test these only after the above targeting options have been exhausted.

It usually doesn’t make sense to build a remarketing audience of customers who have already converted for a B2B SaaS company. But you should absolutely target people who have entered your website funnel—and may even be a qualified lead—to help move them toward the purchase decision. By definition, these audiences are very low funnel and thus are more likely to convert than a higher-funnel prospecting audience.

In general (across all channels), building an account structure is a balancing act between breaking out audience segments based on variable performance and consolidating audiences to accumulate enough data to make good decisions.

It’s important to break out audiences and themes that are likely to have meaningful differences in performance so that you can optimize and drive efficiency for the channel in question. But it’s also crucial that you don’t spread your data too thin across too many campaigns and ad sets.

This is especially true for B2B SaaS advertisers. Since revenue-driving conversion events like purchases and subscriptions will be very infrequent, it’s important not to get so granular with your account structure that you won’t have enough conversion volume to calculate the conversion rates and LTV data for a given campaign (which you will need in order to make meaningful optimizations, as we discussed in the previous section).

On Facebook, audience targeting is king. Intent can differ widely between different audiences, and so can performance. Because audiences form the basis of Facebook account structure, you need to make sure that you are building your account structure out to a level of granularity that’s feasible given the volume of conversion data you are achieving.

Each campaign should be built around a major audience. This will allow you to easily control budget for each audience, as well as set a Campaign Marketing Objective specific to each audience. The campaign marketing objective you choose will determine which

placements and ad formats are available for the audience in question (see the Facebook ad units section below).

Although each campaign should be based on a major audience, audiences can be further subdivided at the ad set level for more granular tracking and optimization.

For example, you may want to subdivide a remarketing website visitor audience by age and gender, since you know that certain demographics perform better than others and you want to bid more aggressively for higher-value demographics. Most B2B SaaS companies will probably not have many paying customers under the age of 18.

That’s why you need to test and optimize differently for each placement (depending on how you happen to weight view-through vs. click-through conversions).

On Facebook, different audiences are likely to have audience overlap, so you have to set up exclusions to prevent yourself from unintentionally targeting the same user with more than one campaign at a time.

If you don’t set up an account hierarchy, you risk bidding against yourself to show ads from different campaigns to the same Facebook user. You also risk saturating a user with ads from multiple campaigns, which may not have coherent messaging or could simply be redundant.

In the above example, there’s a huge amount of overlap between the two example Lookalikes, Audience 1 and Audience 2. Since Lookalikes are built as percentages of the total population of a country, any two Lookalikes from the same country are likely to have a high degree of overlap.

To avoid bidding on the same user in multiple campaigns, use audience exclusions based on a tiered account hierarchy. 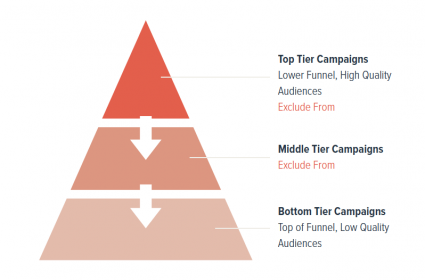 At the top are the campaigns targeting the best-performing, highest quality audiences. These will typically be either retargeting audiences that are furthest along in the marketing funnel, or Lookalikes built off high quality seed audiences (like a CRM list of your top paying customers).

You will want to avoid serving these audiences with ads geared towards audiences higher in the funnel, and so they should be excluded by all lower-tier campaigns.

The lowest tier campaigns should have the most audience exclusions so that they achieve marginal reach without double-targeting higher quality audiences.

With the right audience targeting, B2B SaaS companies will find Facebook a fertile ground for new customer acquisition. Dig into more strategies and specific tactics in The Holy Grail of Growth: The B2B SaaS Guide to Digital Marketing & Paid Acquisition.

Everything You Need To Know About Facebook Stories Ads