It has been said many times and many ways that social media doesn’t deserve budgets, at least not as much as Search, Criteo, or other channels. While there may be some reasoning behind spending more in one channel vs. another during various times of the year, some of these decisions might be decided before knowing everything that paid social media advertising has to offer. Here, I am going to try to lend a hand to the platforms to show you where you might be leaving money on the table. In addition, I’m offering up 5 reasons why social media advertising has a place in your budgets.

This amounts to over 222 Million social media users in the U.S. alone on just two platforms!

On top of that, 76% of Facebook users get on the platform daily to check updates and/or interact. 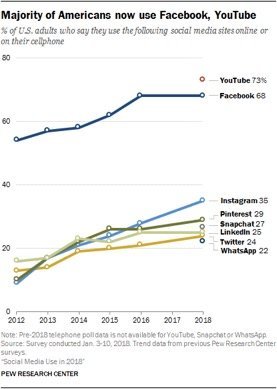 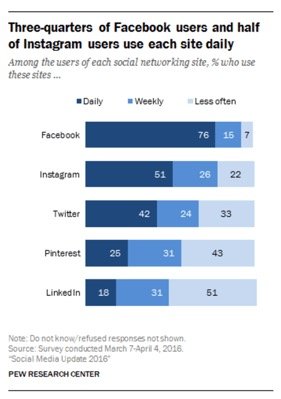 If you are looking outside of the U.S., do not fear. While 80% of the U.S. uses social media, Europe and Central America are heavy users as well with 79% and 84% penetration, respectively.

When it comes to purchasing on social media or being influenced to purchase, social media is MASSIVE in this part of a consumer’s path to purchase. According to Hootsuite’s research, 27% of internet users say they find new products through paid social ads and half of those aged 16-34 say that they research products on social media before purchasing. Knowing only these stats would personally get me to give the go-ahead with social media advertising, but there are four other points that I will call out in why, when combining them all, it should be a no-brainer. 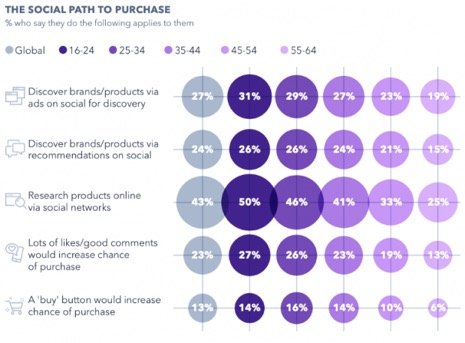 So you know the user statistics above, but what good does that do if you can’t target the right user with the right message at the right time? In short – you can. Social ad platforms have come a long, long way and each of them use first-party tracking codes that allow you to break down user groups based on website traffic to specific pages, time spent on site, how many times, and more.

The general concept of social media platforms is for sharing ideas and communicating with either people or brands. Think about your personal sharing experiences and think back on just how much you’ve shared about yourself willingly. At the bare minimum, you’ve probably shared your name, birthday, the location where you live, your job title, and relationship status and on top of that, you’re either sharing or interacting with organic posts, feeding algorithms with information about your interests and political leanings. In the past, before the Cambridge Analytica scandal, Facebook even bought user information like household income, the number of credit cards used, and specific products you’ve bought from 3rd party platforms. With the basics listed above and the user count in point 1, you can begin to see why audience targeting is so robust on social platforms.

Every social advertising platform has similarities when it comes to targeting, like the ability to place website pixels on your site so you can build pools of people who have either visited or taken an action on your website. All also have the capability of uploading email lists to match users or create lookalike audiences (similar users to your email lists), which match all non-social media advertising platforms.

But where does social advertising differ from, say, Google advertising?

The biggest and most important difference is a passive audience vs. an active audience.

Google targeting is based on non-brand and brand keywords — this is to say that “brand” is your brand keywords while “non-brand” can be seen as keywords that people are searching for that fit your brand and what products you have to offer.

A prime example of this would be if you sold a bike lock. With Google, you can only reach people with your ads if they actually typed in “bike lock” or whatever keyword phrase you bid on. With Facebook (picking one of the many social platforms), you would be able to target people that have had any sort of interaction with a bike lock, which will include other people that fit into this audience group that has similar interests to bike locks like bikes, bike safety, etc. This is considered a “passive audience” due to them not literally typing out “bike locks” on the platform.

It is no secret that social media and 3rd party tracking platforms like Google Analytics, Adobe, C3, and the like don’t play well together. The main reason for this is that social media plays to the idea of view-through having an impact on a user’s purchasing journey, similar to old school billboards. While this tracking piece is a little disheartening, there are ways to track your social media ads in 3rd party tools. If we think about the psychological aspect of it all, appearing on consumer’s timelines can have an impact on offline activities like word-of-mouth, or they can help kickstart a purchase journey psychologically before they even realize it.

After evaluating multi-touch paths in Google Analytics across a number of clients & industries, we have found that, on average from what we can see in the GA dashboard, 3-10% of all transactions touched social.

On top of that, we’ve seen as much as 80% of all new user numbers every month coming from paid social as well.

If you are not running social media advertising at all, not only are you missing out of 3-10% of transactions throughout any given month, you are missing out on the valuable interactions that happen on social where people are discussing your product or tagging friends and family in. Can those interactions be proven 100%? No, but top paths in GA can show you a larger, click-based view of your ad impact.

Which ad below is more engaging to you? 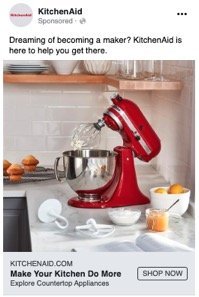 If I were a betting man, I would bet that you probably said the left one — and you wouldn’t be out of the norm on that. The brain processes images 60,000 times faster than text and 93% of all communication is visual. I’ll let that stew for a minute.

This, in my opinion, is where paid social advertising really shines.

Whereas Google is filled with text, and short text at that, Facebook, Pinterest, Instagram, LinkedIn, and all of the other social platforms allow text, sure, but also allow for images and videos to tell a story to users.

In the example above, the left ad has a striking red stand mixer that really stands out when scrolling through a news feed, but it doesn’t just show a pretty stand mixer. This ad shows delicious muffins, giving you comfort. It shows the ease of use and capabilities by having the mixer tilt back with attachments littering the countertop, giving you a sense of adventure. It shows that KitchenAid is there to help you solve a problem, giving you a sense of ease. Adding all of these emotions together, even if someone didn’t click through and purchase, creates a living space in someone’s head, possibly leading to a purchase in the future.

The ad on the right, a normal Google Search ad, does none of the above. It doesn’t make you stop and think. It makes consumers have to read something, which is one of the last things they want when making their way through their purchase journey.

5. Social Media At The Right Time

The first few points above have all lead to this final one. Consumers have choices, and while the majority of social media users head to their social profiles every single day, how do we go about reaching them all across the internet? What if I told you that you can easily do that with each social media advertising platform? Well, you can. In fact, you would have to go out of your way and tell the platforms NOT to in order to not serve ads across a variety of websites outside of social media websites.

Facebook and Instagram alone have over 65,000 websites where your ads can appear, called the audience network. Twitter has something exactly the same, although they have not released that number. With this many opportunities for ad placement, no matter where consumers are online, you can reach them with proper targeting, ad units, and placement choices.

Is Your Social Media Advertising Up To Date?

4 Simple Rules For Using Emojis In Your Marketing