At long last (and still somehow too soon), Apple launched the iOS 14.5 upgrade this week and marketers everywhere hunkered down to prepare for the worst: would CPMs start precipitously dropping or climbing? Would all of your ad platform reporting start a cool game of hide and seek? Would the disembodied spirit of Steve Jobs appear on every Apple device strumming Bono’s guitar and inform users that only Apple should be allowed to track all of their activities and behavior to personalize ads because only Apple is nice and good and wise?

The short answer to all of those questions: no. But we’re not out of danger yet.

While the sky may not be falling, it’s certainly getting closer as the privacy sea levels continue to rise.

That’s why we pulled together a braintrust of experts across digital intelligence, paid social, paid search, and earned media to tackle the key questions around iOS 14.5 and the enforcement of App Tracking Transparency (ATT), specifically:

We will keep this blog post updated with the latest information, observations, and implications about iOS 14.5 and its impact on the marketing world as it continues to roll out across devices, so we highly encourage you to bookmark this page and keep it handy as we learn more.

The good news is that the worst-case scenarios did not come to pass: we didn’t fall off of a data cliff. But we are likely on a hang glider at the moment with some rough winds ahead. Let’s dig in:

Cost: Are CPMs and/or CPCs being affected?

We built out client cohorts in advance of launch so we could identify any anomalous behavior in CPCs or CPMs across Facebook and Google, and we’re not seeing any huge fluctuations (like we saw earlier in the pandemic) at this time.

But we do expect to see changes coming. There’s a couple of reasons we think these haven’t hit yet: 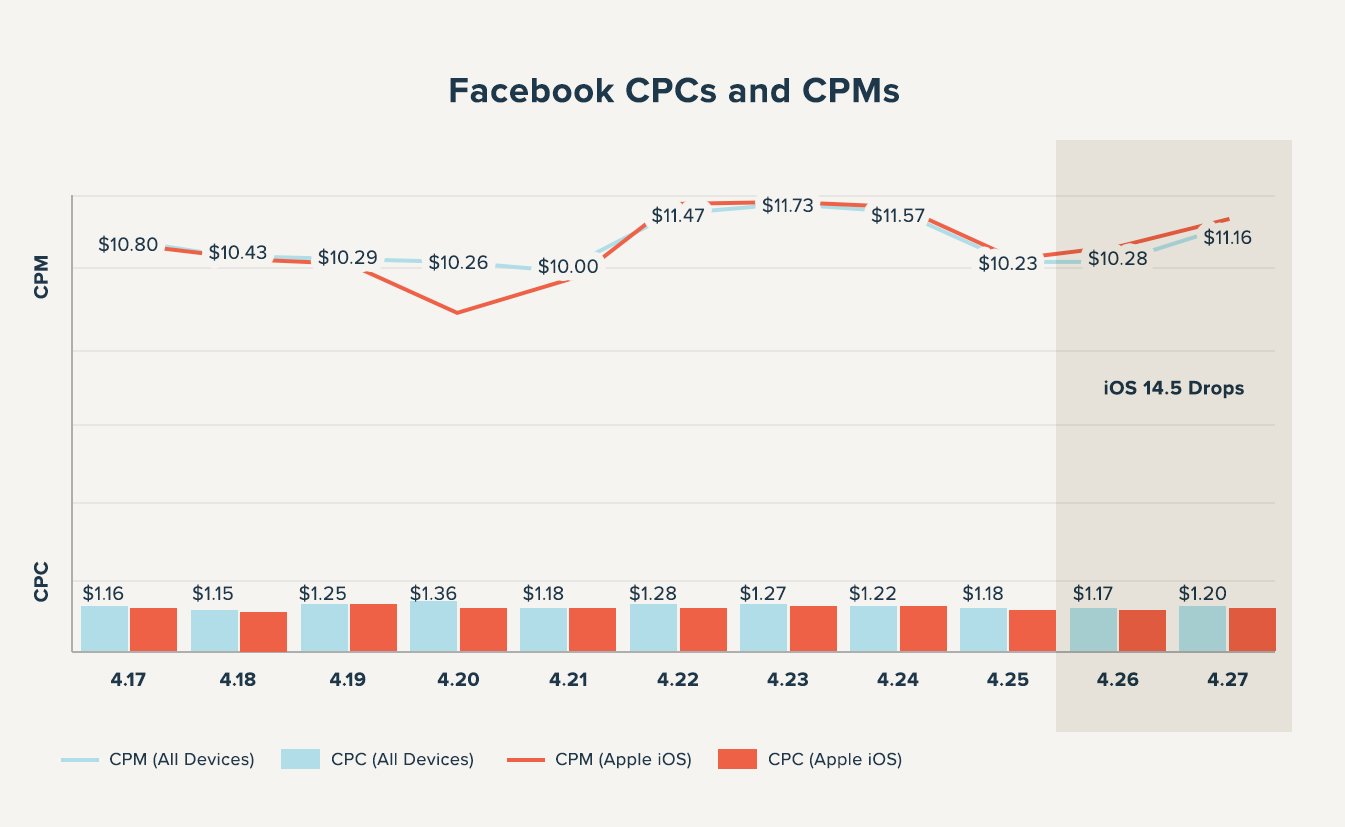 That dip in performance is probably a “when” not an “if,” but it won’t necessarily happen to every brand at the same time.

Marketers will face a reckoning, but individual brands won’t all respond the same way.

Some might shut off some ads, some might move budget to other channels, some won’t change anything. Those responses, especially from big spenders, will in turn cause fluctuations in CPM and CPC across channels to hit specific industries and ad categories in different ways, at different times. Indeed, both the length of conversion cycles and margins will likely factor heavily into these decisions, with some (mostly larger) brands able to wait out the storm and search for survivors in the morning.

We also know that most major SAN (self-attributing networks) ad platforms aren’t yet accepting data from Apple’s SKAd network (SKAN). Until the ad networks support SKAN postbacks to MMPs, marketers will not be able to observe conversions and other events for iOS 14.5+ users.

Snapchat (and now Twitter and TikTok) is a major exception here and leading the way in supporting SKAN postback to MMPs, as are some large non-SAN ad networks like Criteo. But it’s important to note the difference between the individual SKAN postbacks supported by Snapchat and others and the large-scale aggregate SKAN data we’re expecting to see from Facebook in the future. Marketers will be able to observe conversion events once Facebook starts supporting SKAN postbacks, but aggregate SKAN data will mean reporting delays and lower resolution in general.

Conversion: Am I losing visibility into my channel-specific conversion data?

The biggest single fear advertisers are facing is loss of visibility into channel-specific conversions, and while we’re not seeing widespread breaks in conversion data right now, they are still on the horizon.

Pixels will someday soon be a relic due to the inevitable and continued mitigation of in-browser tracking technology, and marketers will need to adapt accordingly.

That doesn’t mean you won’t see anything on the channel side; instead, you’ll be relying on modeled data. That’s not exactly new; Google, for example, has been doing it for years for conversions the platform can’t “directly observe,” like in-store conversions.

But that Google example is also useful to illustrate the limitations and challenges of moving from relying on deterministic to probabilistic modeling, which will be happening across the board on platforms as additional privacy restrictions roll out. Platforms like Google and Facebook treat modeling as a black box, and give little information into what real data those models are based on, what conditions are being applied to that data, and how exactly the models work.

The in-store conversion example is a rare instance in which Google has revealed what data the model is using: 2% of Android users (although they do publicly state that any data shown in the platform meets a 95% significance threshold). That’s tiny, and not necessarily a good stand-in for all in-store customers—and is a great illustration of why marketers need to adopt a trust-and-verify approach whenever possible (which we’ll discuss in further detail in the actions to take section).

But those days are gone: you can now only view attribution data for the window an audience is optimized for in the Ads Manager Interface, without a way to standardize the reporting to look at the big picture across campaigns. Let’s say you have campaigns optimized for the 7-day click and 1-day view attribution window, and other campaigns set up for 1-day click: you will now only see attribution data for your chosen attribution window instead of a holistic aggregated attribution set. On top of that, any campaigns optimizing for a non-direct response event (i.e. traffic, reach, video views) will lose the ability to report out performance in Ads Manager

Luckily, we have discovered a solution to the standardized attribution comparison issue you can explore here.

[Update 4/30/2021] Google is not collecting IDFA and is taking steps to fill in the gaps. They just announced a change to the way ads served on “a handful of Google apps” will handle clicks: the familiar GCLID parameter will not be appended to landing page URLs resulting from an ad click that occurs on iOS 14. We expect this will result in fewer landing page views with GCLID values in reporting.

In addition, Google is introducing a new URL parameter (no confirmation on what it is, but speculation is that it could be WBRAID) to bolster measurement of ads served to iOS devices.  They also added a new first-party cookie (set via GTAG, GA or GTM installed on a website) that will attribute conversions back to ads served on iOS 14.5 devices. In the short term, that means you should expect to see fewer reported conversions, but in the future we predict the new URL parameter and the new cookie will help bridge conversion reporting gaps.

Opting Out: Are people opting out of tracking now that they’ve upgraded?

This one is still largely TBD, but we included here because there is something new we know: Apple is using a privacy setting called limit ad tracking (LAT) from older versions of iOS to automatically opt users out in a way that is likely to significantly decrease the number of users even seeing prompts to opt into tracking.

In an internal straw poll, we found that approximately 60% of our employees had the “limit ad tracking” option turned off. For the 40% that had it turned on, they were opted out by default across all apps. That’s about on par with this research from Singular: 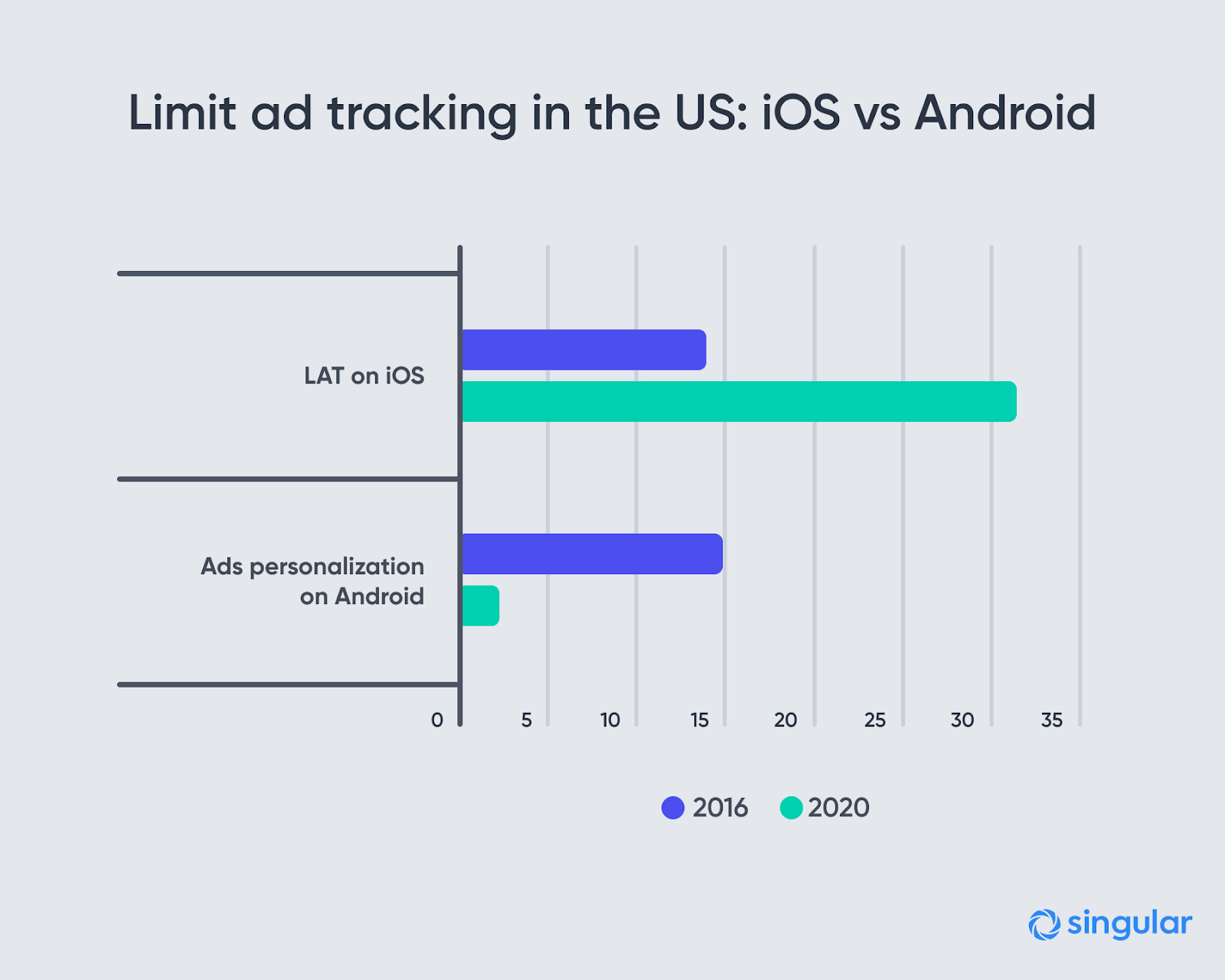 This is a pretty disingenuous inheritance: opting into Limit Ad Tracking on your phone is not the same thing as opting to not allow apps to even ask for permission to track, especially given how robust the ATT policy is by comparison.

There is a separate opt out for Apple’s own advertising, deeper in the privacy settings. It’s also called “personalization,” as opposed to “tracking.” About 35% of our straw poll had opted out of Apple’s ads as well. Both functions appear to be persistent once users upgrade.

While it’s not an exact science, it will mean that for an app with an average opt-in rate of ~26% (per AppsFlyer), it’s possible that now only 26% of 60% of their users will even see the prompt.

That takes opt-in rate down to a lowly 15% and creates an even steeper decline in available data.

And it compounds from there: the user needs to opt in to both apps and not be opted out by default to stitch the data together. That’s more like needing to shoot an arrow through two hoops and still hit the target.

Our Predictions: What will happen next now that iOS 14.5 is launched?

Full disclosure: we don’t know exactly what will happen, but we have some strong educated guesses as to what we’re likely to see across the coming months:

There are several major ways iOS 14.5 is likely to hit advertisers on Facebook:

We do not think that all of the effects of the iOS 14.5 update will be felt right away, but will have a rolling impact over the next few weeks.

Because there is no exact date when CPMs and CPCs will change dramatically, it’s likely to be difficult to determine correlation vs. causation, but our teams will continue to monitor this closely and update accordingly with new information and data as it surfaces.

The likely long-term effects of iOS 14.5 on Google are more muted than what we predict for Facebook. Here’s what we expect to see initially:

In general, we will probably see measuring “halo effect” become more important as conversion attribution shifts away from paid traffic that was formerly attributable by capturing IDFAs. It’s entirely possible we will have to get more creative about upper funnel performance measurement in the future because channel attribution will become less effective.

Take Action: What do you need to do right now to be prepared for the continued iOS 14.5 rollout?

The shift to probabilistic modeled conversions will almost certainly be the biggest change and challenge for marketers moving forward, but it won’t happen overnight. There is time to get your house in order to be as prepared as possible for the privacy-first future:

Related Posts
Prev
Next
Opt In, Adoption, and Tracking, Oh My! Making Sense of the Hysteria Around iOS 14.5+

The Impact of Apple’s iOS 14 on Digital Marketing