By now, every major digital ad platform has offered up some guidance on the expected impact of Apple’s recent privacy changes with iOS 14.5+ and beyond—most importantly the App Tracking Transparency (ATT) feature.

Facebook has reacted the most strongly, accusing Apple of doing damage to small businesses and phasing out its 28-day attribution window for ads before the update was even released.

While the initial impact of iOS 14.5+ (which rolled out in late April) to both marketers and the data presented was minimal, that’s all changing: just days before Apple’s WWDC conference in early June, adoption rates predictably soared to over 60%—and that number is soon expected to reach critical mass.

Marketers have been speculating about the impact this will have on Facebook ads, questioning everything from the accuracy of performance data to the ability to find audiences. But let’s get down to brass tasks: what everyone wants to know is whether Facebook’s algorithmic ad service will be able to run as effectively with less data.

White Paper
State of the Data 2021: Prepare for Marketing Data Privacy Changes
Learn how to embrace privacy as a true brand differentiator with the ultimate data playbook.
Download White Paper

One way to fill in the potential blanks in the customer journey and accurately assess the effectiveness of marketing investments is through conversion modeling. And that’s exactly what Facebook is starting to use.

What is conversion modeling?

Conversion modeling refers to the use of machine learning to quantify the impact of your marketing efforts when conversion data can’t be measured, whether due to tracking restrictions on iOS devices or blind spots from cross-device purchase behavior.

Modeled conversions use aggregated and anonymized data to estimate conversions that ad platforms like Facebook or Google are unable to observe directly—providing a more complete report of your conversions while respecting user consent.

Why is conversion modeling so important right now?

Conversion modeling empowers marketers to more effectively measure success across the customer journey and optimize performance where conversion data may be partial or missing. Here’s how:

Right now, your business is likely missing out on a significant subset of individuals who are less reachable due to the iOS changes. Modeling addresses that issue by feeding the algorithm more data to ensure your ads are getting served to the right people at the right time.

As opt-out rates hit critical mass, modeled conversions will be a top priority for marketers looking to unlock a fuller picture of consumer behavior while respecting user privacy.

In response to Apple’s massive tracking changes, Facebook will now model conversion data for the first time to help improve its ad algorithm delivery and performance.

So what does this mean for you?

Facebook recently sent out a new update to select advertisers detailing three changes to how it’s now tracking events and conversions. Of the three changes, one stands out as the most monumental:

Now, marketers are able to “model” the behavior of opted-out users to get insight on what they’re doing in the 7-day click, 1-day view window—and ultimately help reshape and reconfigure Facebook’s machine learning tool with more complete and effective data.

What we know so far about Facebook’s modeled conversions

With ATT changes, Facebook can no longer use alternative identifiers (e.g. IP addresses) to store opted-out users’ third-party web and app activity data alongside their Facebook or Instagram accounts. These restrictions have led some Facebook advertisers to see reductions in performance data being reported in the UI (specifically, increased CPAs and decreased ROAS).

By adding estimated conversions into its 7-day click, 1-day view attribution windows, Facebook can help marketers account for lost data and provide a more accurate view of performance based on modeled estimates.

Here’s what we know so far about Facebook’s new measurement solution:

Conversion modeling is not new to digital advertising: Google has been doing this forever

Whether or not you’ve realized it, conversion modeling is an established thing in marketing—in fact, you’re probably already using it.

That’s because Google has been modeling conversions for years, and you (or your counterpart on the search side) are likely using them in your reporting, to make decisions, and to build your paid search strategy.

Consent Mode was built with the understanding that unconsented users convert at a lower rate, as shown in the example below: 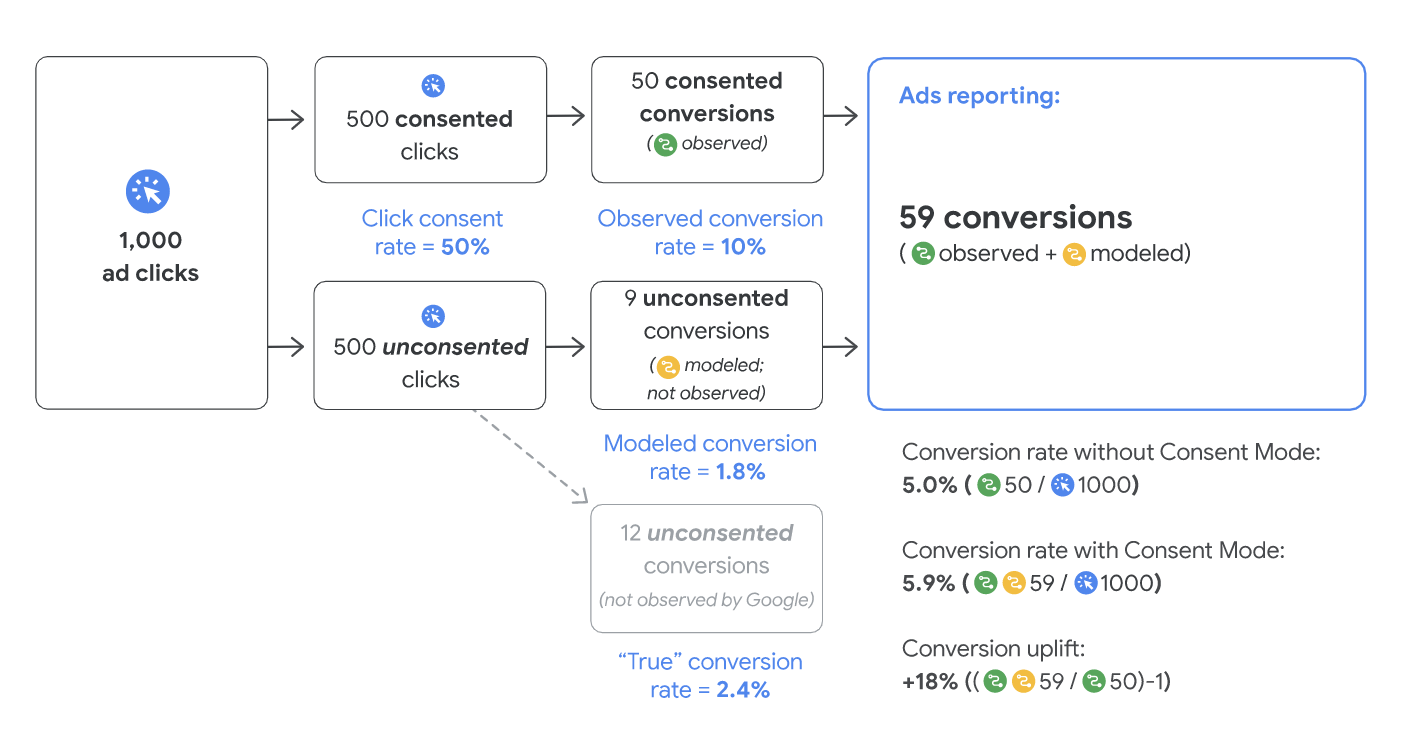 According to Google, conversion modeling through Consent Mode can help restore more than 70% of ad-click-to-conversion journeys lost due to data restrictions.

Should you be concerned about Facebook overreporting on their modeled conversions?

Think about it: Facebook has a vested interest in making modeled conversions work. If they overreport on modeled data, and end up completely off the mark, they risk losing the trust (and business) of their advertisers—which is something they’re not going to jeopardize at any cost.

In fact, to make their conversion reporting as robust as possible, Facebook rolled out new metric annotations to highlight where modeling may be used to account for certain conversions. They also plan on only including modeled data when they have enough information to confidently model off of.

Actions you can take to prepare

With the long-term implications of iOS 14 (and its direct changes to tracking across mobile apps and desktop) still up in the air, it’s vital that digital marketers adjust and adapt as soon as they can. Here are a few key steps you can take now to proactively prepare.

Basic steps that you should already have in place:

The crucial next step to help you prepare for the future: