iOS 14.5 is here! Get the latest post-launch information and guidance from our digital marketing experts in our new blog post.

While you’ve probably seen plenty of sensationalist headlines about the upcoming iOS 14 update from Apple (see: Safari now blocks Google Analytics on sites, new Privacy Report feature shows, which we already debunked), the truth is that much is still unknown about the update and it is likely to have a broad impact across the digital marketing ecosystem. Apple itself has just pushed the release until next year, which gives you more time to prepare for the changes.

We’ve put together this guide to make sure you have the information you need to prepare without inciting an unnecessary panic.

White Paper
State of the Data 2022: Get Privacy Proactive & Comfortable With Compliance
Explore the entire landscape of upcoming changes to your marketing data.
Download White Paper

The Basics: What you need to know about the iOS 14 update

What is the IDFA?

The IDFA also allows these platforms to enforce frequency capping, attribute app installs to ad platforms, and measure campaign performance. It’s similar to the Android Advertising Identifier (AAID) and commonly referred to as a Mobile Advertising Identifier (MAID). The IDFA is often used in tandem with cookies (which only exist in web browsers) to create a rich identity graph for ad targeting.

With the release of iOS 14, Apple is changing the way app developers can access the IDFA from an opt-out approach to an opt-in approach. Before the update, IDFAs were available for the majority of users; with iOS 14, we expect to see very few users choose to opt-in. Advertisers and platforms are likely to have access to a fraction of a % of the previous IDFAs available.

The iOS 14 update will essentially kill IDFA as a persistent identifier for users with iOS devices.

When will iOS 14 be released?

The specific date is still up in the air, but Apple has indicated the update is scheduled to occur in early 2021.

The Impact: How the iOS 14 update is likely to affect your digital marketing

Apple has provided very little information about the potential impact of the update (beyond a simplistic overview showcasing the user experience when they are asked if they want to opt-in), hence the sheer amount of speculation. But we’ve identified two major areas you’re likely to see dramatic changes immediately following the release of iOS 14:

Apple has released the SKAd Network, which will not share any user, or device-level data with an advertiser. Simply put, it will allow Apple to control attribution passed back to Registered Ad Networks.

This is less than ideal because Apple has indicated that SKAd Network will: 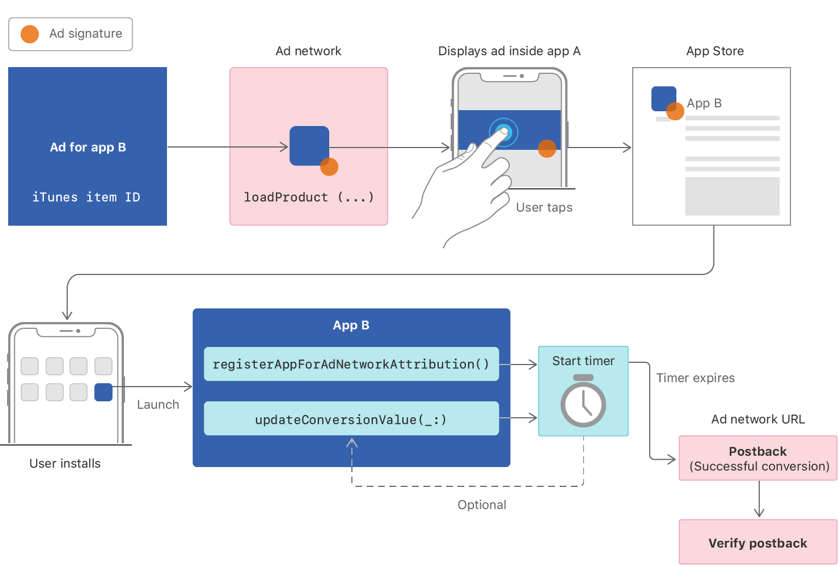 How the SKAd Network will pass data back to ad platforms and MMPs (Source: Apple)

Additional limitations of the SKAd Network include:

It’s worth exploring how all of this might affect app developers and what possible solutions to these challenges might look like, but make sure to consider any recommendations with a grain of salt, since we don’t know exactly what the post-IDFA Apple ecosystem will look like (and probably won’t until at least October).

But one thing we do know is that the biggest impact will likely be on targeted advertising.

It’s tough to pinpoint how reliant advertising platform identity graphs are on IDFAs. If Facebook’s announcement that they believe they will see Audience Network revenue cut in half is any indication, the update is likely to have a huge impact across advertising on the open web. Indeed, if we take the conservative view that 50% of mobile users have iOS & 50% have Android, the announcement indicates that Facebook believes there will be a complete loss of user-level targeting across the audience network for iOS.

It should be noted that Facebook will not be asking users to provide them with an IDFA at all, so even if a user wanted to opt-in, they won’t have that choice available to them.

But the most significant effects here will likely not be felt by Facebook, or any of the walled garden advertising solutions (Google Search, YouTube, etc.), as their in-platform user ID graphs will likely provide them more resilient audience targeting solutions.

The real impact will probably hit apps and programmatic placements across the open web the hardest. It’s not that advertising will stop: rather, it’s likely that we will see a decrease in targeting power and control that will ultimately create more inefficiencies (like not being able to control frequency capping) and poor ad personalization leading to negative user experiences. It remains to be seen how publishers will try to combat this, but it’s possible that they may just add on additional ad units to help recover revenue streams, to the detriment of users and advertisers alike.

Beyond those driving App Installs, the best way to prepare for this as an advertiser is to ensure you’re capturing user information whenever possible. Capturing emails will be crucial as their value is likely to increase as other IDs fall by the wayside.

Last week, our team spoke with many of our platform partners and asked them to share their recommendations and resources for advertisers that may be impacted by this change. Please note that these recommendations are subject to change and we recommend reviewing their specific websites.

Essentially, all of the platforms are recommending that their clients ensure they’re using the most recent release of their specific SDKs to ensure they can capture the IDFA (following the permission requested flag). The nature of permission-based IDFA collection has created significant architectural changes, and using legacy SDKs will not allow for the collection of IDFA following the new protocols.

It should also be noted that all recommendations provided pertain ONLY to those advertisers running App Install campaigns via these platforms.

If you’re using an MMP such as Kochava, AppsFlyer or Branch, you should follow their specific instructions:

Our partners at Facebook have provided the following information about changes related to the SKAd network and what they recommend brands do to prepare:

Due to significant restrictions imposed by Apple’s SKAdNetwork API, for app install ads targeting iOS 14 users, we will operate with the following limitations starting in early September (which we may adjust with future releases):

We recommend reviewing all the ad accounts currently running app install campaigns for your app and consider consolidating budgets as you prepare to operate with one ad account for iOS 14 app install ads. If you typically create separate campaigns or ad sets per geo, consider grouping by geos, product category, language, ARPU (average revenue per user) to operate with a limited number of campaigns in September.

Finally, we recommend our partners take the following steps to prepare for iOS 14:

Our partners at Google also explained the effect of the SKAd Network on conversion tracking and shared a checklist of recommended actions::

Once iOS 14 rolls out, any app or SDK that wants to access the IDFA would need the user’s explicit approval.

Google’s vision of raising the bar on privacy for users while also sustaining a healthy, ads-supported ecosystem also applies to apps.

We are exploring a variety of options to continue to meet advertiser needs on iOS campaigns. It’s possible that this may involve alterations to campaign features and functions, and we’ll have more to share in the coming weeks.

App Campaigns for Installs relies upon the iOS IDFA to measure conversions and to optimize campaign performance. As stated above, ACi will incorporate two additional approaches to optimize for iOS campaigns: conversion modeling and SKAdNetwork. We also recommend changes to campaign best practices:

Advertisers should limit the total number of App campaigns to substantially fewer than 100 campaigns per app. This is to ensure that each campaign has sufficient conversion signals and to ensure compatibility with SKAdNetwork.

TBD – we may have additional campaign changes or new requirements for campaign minimums.

We do recommend that tROAS campaigns for iOS consider alternative bidding strategies at this time (such as tCPA) as it is unlikely that we will support tROAS for modeled conversions at launch.

Several ACi campaign features may no longer be available for non-consented users on iOS. These may include, but are not limited to:

The Trade Desk recently announced a new framework known as Unified ID 2.0 along with a few additional identity innovations, including:

The Future: What comes next?

There are many platforms promising the next generation of identity resolution tools. Regardless of the technical sophistication on display, the lack of a foundational identifier is going to lead us down a probabilistic path. This is less than ideal for an industry founded on focusing on precise targeting of users at the right time.

It is likely that we will see many minor networks fade as they fail to compete with the identity graph strength of the entrenched players. Given Amazon’s growing programmatic arm, it wouldn’t be surprising to see them grow their market share and possibly acquire some of the smaller exchanges to better leverage their deep identity graph, spanning entertainment, gaming, commerce, smart speakers and more.

While not specifically related to the IDFA changes, the attribution solution employed in the SKAd Network looks very similar to Apple’s “Private Click Measurement” proposal shared by John Wilander on the Webkit blog in May 2019. While this has yet to move into production, we believe this is the ultimate state for ITP and one that will likely arrive within the next 6 to 9 months.

Hold on tight: it’s going to be a bumpy ride as Apple looks to assert their market dominance over the digital marketing world.

Any time cookies are discussed, it’s important to make reference to Google’s Privacy Sandbox. This solution is likely to come to Google’s Chrome browser before the end of 2021, but its final state is still unknown (although there’s plenty of speculation about the existence of a secure, privacy-centric ID (similar to a MAID) for web-tracking).

Not a new concept (and one that comes with its own baggage) but incremental measurement is likely to become more of a focus for brands looking to understand the impact of their media. Of course, if the media is poorly targeted and hard to control, then this may not be very effective beyond the existing walled gardens of Google & Facebook.

Want to learn more about the wider state of data privacy in 2022? Check out our free whitepaper to explore the entire landscape of upcoming changes to your marketing data.

Truth: Safari 14 Will Definitely, For Sure, 100% Not Block Your Google Analytics