Video, video, video. It’s all the rage these days, from an eMarketer study estimating that the average US adult will spend almost 100 minutes per day consuming video in 2019 to YouTube stats showing that 1 Billion hours of video being watched each and every day, it’s a good assumption that video is massive these days, especially on social media.

Facebook has been one of the leading drivers in video consumption and advertisers are taking note by continuing to spend more and more every year, controlling “nearly 87% of US social network ad spending…”!

That’s a lot of moolah. But are you actually using all of your video ad dollars the correct way or are you just flushing those funds right down the toilet?

Below, I will show you how to retarget those video consumers on Facebook and Instagram with an end goal of having them purchase from you. Let’s begin.

First off, I probably need to preface by telling you that you need a few things in order to make this happen: a FB/IG business page, a FB ad account, videos, and $ to spend.

Secondly, you need new content to advertise after building out these retargeting audiences that I will get into below. This new content can be new videos, images, slideshows, dynamic catalog ads, whatever you want, but make sure they are actionable because these audiences already know your brand, so you are one step away from either getting them to purchase or turning them off of your brand forever.

Thirdly, you need enough video views and video engagements to actually build out audiences inside of the Facebook ads dashboard. For privacy reasons, the minimum size to build out audiences is 1000 people. This could be a compilation of views and clicks, but if you aren’t sure if you have these numbers, best to just move down the page and build them out and see for yourself.

Now that we have those points out of the way, the audience building begins.

Go ahead and hop into your Assets -> Audiences library

Once there, click on the “Create Audience” -> “Custom Audience” and then choose click the “Video” option in that popup window.

The next window (below) is where you get a number of options to choose from – time length of a video viewed or percentage watched.

Based on the length of your video, I suggested using these 3:

The reason I suggest those in particular is more of a test than anything. That 3 second option is rather short and doesn’t really show any initiative or action taken on the video. Think about your own personal scrolling habit – 3 seconds is a stop, a quick read, then a scroll away from the video. The large 3 second audience that will be built from any video is going to be rather inefficient in the long run vs the other three from above.

Once you click on one of these three options (I will use #2 in this example), you will then have to choose the videos that you want to base the audience off of.

Once there, you will choose the page you want to base this off of and then click on the “Select by:” button where you have the 4 options below.

My suggestions here are to built 3 separate source audiences:

You have the ability to lump all of these into one audience, but having them broken out into separate ones allows for a more diverse budget allocation based on what is working the best, per purchase cpa or ROAS.

Select the videos you want and then click “Confirm” 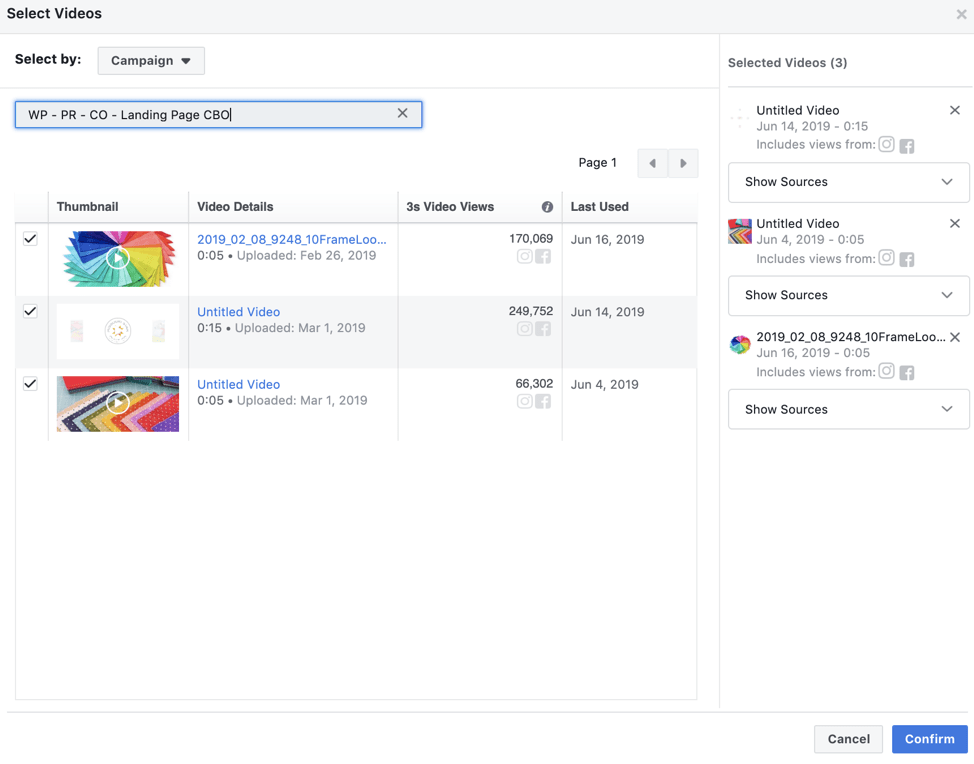 This will take you back to the main popup where you selected what kind of video audience you wanted to create. Next up is choosing what time-frame you want this audience to fall into. The popup there says “The number of days people will remain in your audience after they engage with your content. People will be removed from your audience after the set time period unless they engage with the content again.” with the max look-back being 365 days.

365 days is a long time for anything really, so I don’t suggest just blanketing everything into one bucket. Rather, I would choose 30, 60, or 90 days, which are rather typical time-frames on retargeting audiences. This will allow for even more of a testing structure, similar to separating source audiences, above. Once you’ve chosen the time-frame look-back, click the “Create Audience” button on the bottom right and you will have created a strong retargeting audience based on those video views you’ve earned.

You should see the audience at the very top of your Audience dash with a Size of Below 1000. These audiences typically take about a day to compile so don’t be alarmed at this.

Once that’s done, the next steps are simple – building out the campaign in the ads dashboard and even creating lookalike audiences based off of that new video view engagement audience. I won’t go into those steps, but what I will say, if you built out the multiple audiences based on the 30/60/90 days, make sure you exclude each lower day range from the upper. Example: 60 days should exclude the 30 day and the 90 days should exclude the 60 days. It’s simple in execution.

Now that you have built these audiences and campaigns out, let them get to statistical significance based on your average cost per purchase and then reevaluate your tactics vs other retargeting tactics. If they are working for you, move into the expanded video views (365 maybe even) and do the same thing again. Remember that it is all about testing for short periods of time without breaking the bank.