Budget Settings Are Moving To The Campaign Level Starting September 2019

In a recent announcement, Facebook has said that they are “Moving Budget Settings to the Campaign Level Starting in September”. This is called Campaign Budget Optimization, or CBO for short, and it’s a huge deal.

For those of you that are familiar with the Facebook advertising dashboard, CBO is something you can opt into right now at the campaign level and is simply “suggested” by Facebook. For now, advertisers can choose to set specific budgets per each ad set at either a daily or lifetime spend, which allows for more control over where your money is going, but that’ll all change in September 2019 when Facebook makes it mandatory. Is this a good thing or a bad thing? I’ll try to cover both sides of the issue below.

In an early announcement regarding this, Facebook has said:

“This is part of an ongoing effort to help you efficiently manage and maximize value from your campaigns — overall, we have seen advertisers benefit from lower costs per results for their campaigns, while freeing up time to plan future campaigns and focus on other areas of their business.”

The reasoning behind it makes sense, right? More efficient advertising means more return, leading to more money spent on the platform. Simple really, and based on the case studies they are providing (links below), I can successfully run my own campaigns with increased efficiencies and clickthrough rates. I think this is a step forward, not back.

CBO is, simply put, the Facebook algorithm distributing a campaign-level budget into ad sets inside of said campaign based on your campaign-level goal. Below is this concept in a visual form and below that is yet another explanation in bulleted list. Hopefully one of these suits your learning style.

This type of setup may seem rather basic and constricting, but I’ve found success in leaning into the algorithm recently, which I will go into more detail below.

What This Means For Advertisers:

All in all, it doesn’t seem like the worst thing Facebook has ever done. It feels like they are continuing on their path to make it easier for everyone, including those that aren’t well-seasoned Facebook and Instagram advertisers, to run their own campaigns. From personal experience, it saves time when optimizing budgets between ad sets and lets machine learning take the forefront of the reallocations; computers are faster at compiling data than humans, right?

On top of that, Facebook has provided a number of case studies on this topic that are drool-worthy any which way you look at it, including:

If you want to read up more on CBO, here and here are two links that provide plenty of information to get started. If you want to know more about what I’ve learned from testing CBO, keep reading.

What I’ve Learned From Testing CBO

After testing into CBO, I’ve found that you have to treat this new budget allocation differently than your typical ad set budget optimization. Here are a few of those differences:

1) Audiences sizes are much more important.

Typically, you could get away with a 500k size ad set and a 5M size ad set in the same campaign because you told Facebook how much to spend for each one. Typically you could spend that money out each day, but with CBO, that just won’t fly. Why? Each audience has a finite size that Facebook deems “likely” to convert based on the algorithm; it is just common sense that a 5M audience would have a higher number of these vs a 500k. Therefore I have found that Facebook will still spend more towards that larger audience, even if it is not the best performing.

To even the potential spend out, make sure that the audience sizes are roughly the same or LAL percentages are the same (e.g. all 2-3% or all 6-10%). This will assure that size of audience isn’t a factor in where to spend is going, and rather will be based around whatever goal you choose. Another option is setting spend goals (#4 below).

After testing multiple Campaign Bid Strategies with ad sets numbering from two to dozens, I’ve found that you need to let the algorithm get its footing and complete the “Learning Phase” that is shown at the ad set level. Once that phase is done, it will show “Initial Learning Complete,” which means that 50 optimization events are needed in order to stabilize delivery, even if those are landing page views.

As an example, if one ad set in that campaign is performing extremely well and getting most of the spend, you may be able to act on that top one, but the others inside may not have reached 50 yet which means you have to leave it be so that you don’t mess with the learnings being compiled on Facebook’s side.

CBO lets you change your bid strategy whenever you want, but should you? Definitely not. Similar to changing ad set bid strategies, this resets the FB algorithm’s learnings where fluctuations in performance are almost a guarantee. These objectives may be new to your account, so there will be some testing that needs to be done between these. It’s generally a good rule of thumb to start with what you know (lowest cost with big cap/lowest cost), but I’ve found that there is no one size fits all option. Set up a testing strategy between campaigns and time frames, but make sure that you are using strict testing parameters in order to justify switching all of your campaigns to just one strategy. 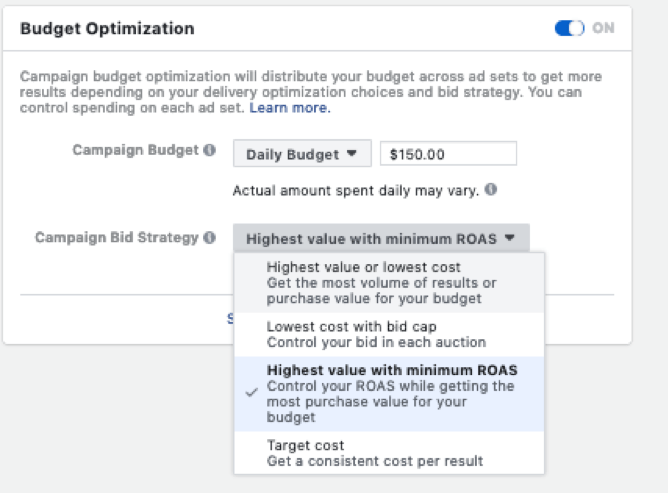 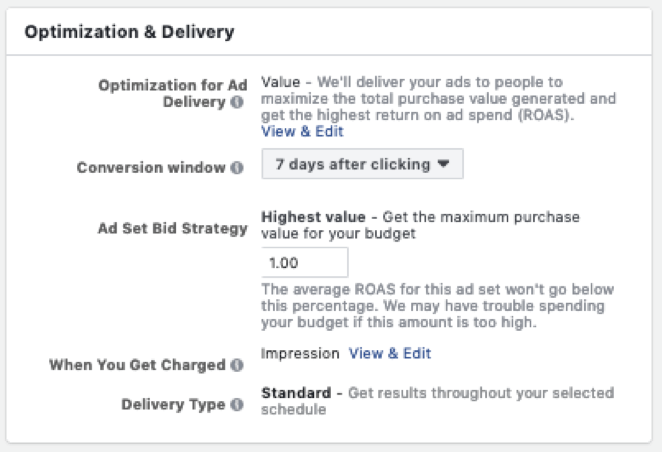 4) You can technically still set spend goals for Ad Sets.

This may sound like I am completely flip-flopping on my other points, but Facebook has assured us that if you need to spend a specific amount for each ad set, you can use the “spend limit” feature. There are two types of spend limits: min and max. The minimum will tell Facebook that you want to spend at least the provided amount no matter what the result, while the maximum does the complete opposite and does not spend more than what you’ve specified. This will come in handy if you have sales that are going on at the same time and want to make sure both are spending.

What You Can Do To Prepare For CBO

Now that you know all about the why, what, how, and where, you are thinking “What next?” and the answer is: testing to stay ahead of the curve.

Get a test budget, create similar-sized audiences, set the bid strategy to something you know, and let it evolve. Facebook rarely provides this kind of lead into a major change like this, so it’s best to know what you want to do when the time comes.

Let us know if you’ve tested this in the comments!