If we’ve learned anything in the performance marketing world anything, it’s that advertising platforms like Facebook and Google Ads have much more (and much better) data than any individual advertiser or third-party vendor. Because of the large amount of data that these platforms have, they are able to provide improved tracking and targeting tools directly to advertisers.

A tool that we find valuable is the lookalike model. With a lookalike model, advertisers provide a source of audience data to an ad network which then matches it to other users on their network, with the goal of finding new audiences that most resemble the characteristics of the source audience data.

White Paper
The Silver Lining: How a Recession Unlocks Low-Cost High-Growth Opportunities
Disruption of any kind always opens up opportunities. You need to be prepared to seize the moment in a period of economic uncertainty—even if it means sacrificing short-term profitability.
Download White Paper

The theory behind lookalike models is that people who exhibit certain characteristics or perform certain actions (i.e. sign up for a trial, purchase a product, etc.) will tend to have some commonly identifiable traits that the ad platforms can parse. This theory has been proven true: the lookalike model has been such a success, in fact, that it’s become one of the primary targeting methods for Facebook advertisers.

And although Facebook Lookalike Audiences tend to get the most attention when discussing lookalike modeling, Google Ads has a comparable but extremely under-utilized targeting method of their own: Similar Audiences.

What Are Similar Audiences?

To figure out which people “look” most like an existing audience, Google uses a machine-learning algorithm to scrutinize a source audience (like a website visitor list) to find shared member characteristics, and then it finds new people with characteristics similar to those of the source audience.

For example, Google Ads Display Similar Audiences use cookie data from people who visit third-party websites that are part of Google’s Display Network to determine the browsing behavior, and characteristics implied by that behavior, of a source audience. It then looks for users whose browsing behavior indicates they have similar characteristics or interests to this source audience and places them into a Similar Audience that advertisers can target within Google Ads.

Here’s how the process works in Google’s words:

Google Ads looks at browsing activity on Display Network sites over the last 30 days, and uses this, along with our contextual engine, to understand the shared interests and characteristics of the people in your remarketing list.

Facebook advertisers have seen a lot of success with lookalike audiences, but do Google’s Similar Audiences show the same potential?

First, the performance data. According to both our own internal data and external benchmarks, Similar Audiences certainly do provide a boost compared to other prospecting methods.

According to Google, for example, Similar Audiences can boost performance to the tune of 60% more impressions, 48% more clicks, and 41% more conversions.

For this client, Similar Audiences show a clear performance improvement with a CPA that is 23% lower than other prospecting and conversion rate which is a full 122% better.

Another account showed an even more pronounced performance increase when Similar Audiences were utilized, as shown here:

In fact, our internal data shows Similar Audiences can almost match the performance of remarketing.

How To Add Similar Audience Targeting To Your Campaigns

For every pixel-based Remarketing List with at least 500 cookies, or for every Customer Match list you upload with at least 1000 emails that Google can match to users, Google will automatically generate a Similar Audience.

Keep in mind, however, that if you upload first-party data using Google Ads’ Customer Match feature, it will not be possible to build a Display Network Similar Audience based on that data. This is because GDN needs cookied browsing behavior on its users in order to build a Similar Audience.

The good news is that since Google is the sole owner of Gmail and YouTube, it’s still possible to build Similar Audiences using first-party data for both Gmail and YouTube. Google can match the e-mails you provide with Gmail or YouTube users and build a similar audience based on those users’ characteristics.

With Customer Match, you can take advantage of your first-party data to build Similar Audiences that can be targeted with Gmail ads or YouTube ads, but not with Google Display ads since GDN operates through third-party sites.

In order to create a Similar Audience, you must first either build a Remarketing List in Google Ads or a remarketing audience in Google Analytics.

You can create a new Remarketing List in Google Ads by clicking on the red button in the top left of the “audiences” section of an account shared library, which gives you the following options in a dropdown menu: 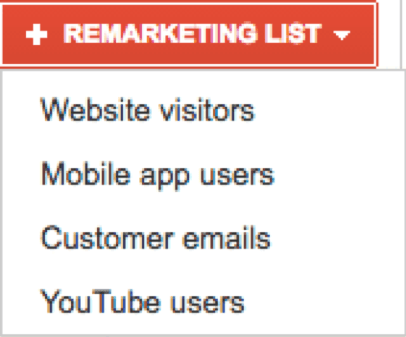 Once you create an audience in Google Analytics, it will populate in the shared library for the linked account in Google Ads.

In the Google Ads shared library audience section, you can see a full list of both existing Remarketing Lists and the auto-generated Similar Audiences that accompany them. Here’s an example of a remarketing audience, “GP Converters”, and a Similar Audience built from it: “Similar to GP Converters.”

There are a few things to notice here. First, you’ll see that the estimated list size for each audience is subdivided by columns according to the type of campaign: YouTube, Display, and Gmail only Display.

You’ll also notice that the Gmail only Display column says “unavailable” for both GP Converters and Similar to GP Converters. This label indicates that there are no converters eligible for remarketing on Gmail because of the privacy restriction mentioned above. An “unavailable” label will also show when there aren’t enough members in the Remarketing List used as a seed audience to build a Similar Audience.

How to Add Similar Audience Targeting to Google Ads Campaigns

To add a Similar Audience to a campaign or ad group using Google Ads Editor, follow these steps.

Making The Most Of Similar Audiences

It’s a good idea to experiment with the size of a source audience, since the output Similar Audience size can vary on a case by case basis (seemingly without a clear pattern). This is a clear contrast with Facebook Lookalike Audiences, which scale as a percent of user population in the target country – a 1% Lookalike in the US, for example, has a size of 2 million regardless of how large the seed audience is (although the quality of Facebook lookalikes is impacted by the size of a seed audience).

This will let you segment out performance data for any given ad group by how the performance of the layered Similar Audiences compares to the average performance of those ad groups as a whole.
Say, for example, that ad group A has a CPA goal of $20 which is being met. But for the layered “similar to past converters” audience with a 0% bid modifier, the CPA is actually much lower at $10. This means you can set a bid adjustment of +100% for that Similar Audience in order to get more volume from the audience while still achieving the same $20 CPA goal.

Conversely, you could add a negative bid modifier to the non-Similar Audience traffic to increase efficiency if you’re looking to lower costs. Google recommends that you use the following formula in order to calculate bid modifiers for audiences:

Target and Bid vs. Bid Only

With Similar Audiences, marketers have the option to select either “target and bid” or “bid only” as bidding strategies.

The bid only option allows marketers to layer an audience in an existing ad group and manage targeting via bid adjustments.

You can also layer multiple Similar Audiences in the same ad group. For example, in ad group A you could set a +10% bid adjustment for “similar to cart abandoners” (a $4.40 bid) in addition to your +50% bid adjustment for “similar to converters” which is lower in the funnel than a cart abandoners audience. This will ensure you capture as much volume as possible for your highest value audiences.

Keep in mind that Google Ads will automatically place an audience member in the highest value audience – the one that you’ve bid the most for – so there’s no need to fear bidding multiple times for a member of more than one Similar Audiences as long as your bid adjustments aren’t exactly the same for each Similar Audience.
The target and bid option, on the other hand, means you’ll exclusively be targeting the Similar Audience in question to the exclusion of all other traffic. This can give you granular control over the CPC bid for that audience, liberating your bids so they don’t have to be anchored down by a relative bid adjustment.

Test Similar Audiences For Yourself

Getting started with Similar Audiences is both easy and low-risk. Simply navigate to the audiences section within the account shared library and decide on a source audience from existing Customer Match lists for Gmail Sponsored Promotions and YouTube Ad campaigns, or from existing pixel-based remarketing lists for YouTube Ad and Display campaigns.

If the source audience meets the minimum number of cookies or emails, you will be able to select the corresponding Similar Audience built from that source audience to layer within your campaigns. To begin with, you can layer Similar Audiences with a 0% bid modifier to start collecting performance data without risking any inefficiency and adjust bids from there according to the resulting data.

Google’s Chief Evangelist explains how to look into the future to make sure you’re connecting as effectively as possible with your high-value customers. Find out the details of his forecast in our recording of Rise to the Challenge of… The Vision: The Future of Marketing.

Paid Search Optimization in 2022: What Levers to Pull (and What Not to Do)