We all have biases, good and bad, and many of those attitudes are unconscious, even when they inform or even dictate what we do. But what happens when those unconscious biases seep into marketing?

There are a couple of ways this can happen; the most well-known is in the actual messaging and creative in ad campaigns, whether that’s a lack of diversity in photography or a lack of awareness of cultural sensitivity around specific words or phrasing. But unconscious biases also come into play in the very technology we use to run those campaigns.

The effect can be insidious and is often overlooked, but advertising bias can have a significant negative impact on your business, from brand health to failure to realize opportunities to expand into new audiences. In the long run, these biases perpetuate certain stereotypes in the wider world and can do significant harm to people.

To make sure your brand isn’t accidentally falling into the bias trap, you need to understand where bias comes from, how it impacts advertising, and what steps you can take to create more inclusive campaigns that reflect and speak to a wider audience.

What is unconscious bias in marketing?

Unconscious bias, or implicit bias, is defined as various social stereotypes and judgments that people unknowingly make based on a variety of factors such as age, socioeconomic status, weight, gender, race, or sexual orientation.

Most of our actions occur without consciously thinking about them; that’s how we can go about our day making the millions of decisions it takes to just live normally. But because that process is so dependent on our brain making a lot of judgment calls we may aren’t even aware of, unconscious biases can have an outsized impact on our actions and behavior. 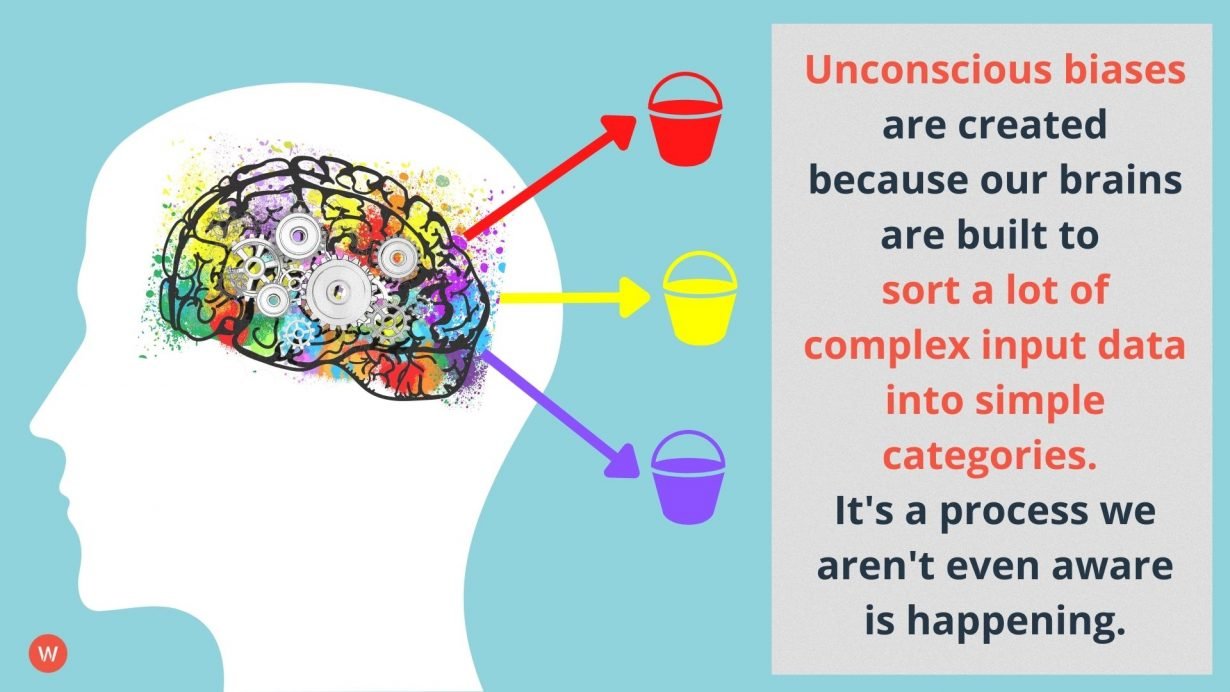 These biases spring from a lifetime of exposure to cultural attitudes, norms, traditions, and other factors that affect how we view gender, race, age, ethnicity, religion, economic class, sexuality, disability, and nationality (as well as other groups of characteristics). That’s why they can be very difficult to identify, challenge, or solve for.

In marketing, this can manifest in a couple of different ways: audience segments, demographic decisions, messaging, photography, cultural allusions, and more. Advertising bias simply means that we’re relying on unconscious assumptions to make decisions about who our brands are marketing to, what we want to say to attract those consumers, and more.

Marketers in general look to correct those assumptions, but, just like individuals, they’re not always aware of how those biases are manifesting or when they’re influencing strategy.

What is the business impact of biased advertising?

Identifying and correcting for unconscious bias is a critical part of the marketing team’s set of responsibilities because the impact of these assumptions can be so detrimental to your business—and to society as a whole.

One of the major reasons advertising bias continues to be an issue is that campaigns based on demographic audience segmentation can provide a shortcut to more personalized ads that can drive short-term performance gains.

But the long-term effects are serious and have the potential to cause irreversible damage. Reliance on ads that speak to these unconscious biases will put substantial limits on your brand’s potential for growth by excluding new audiences and can cause major harm to your brand image if you are relying on stereotypes in brand creative and messaging.

In one particularly egregious (and infamous) example, a widely criticized advertising campaign by Dove featured a Black woman that transformed into a white woman after using Dove soap. Dove’s positioning in the campaign was all about purity, which was represented by whiteness in the ad creative, an idea that was immediately identified as overtly if unintentionally racist. 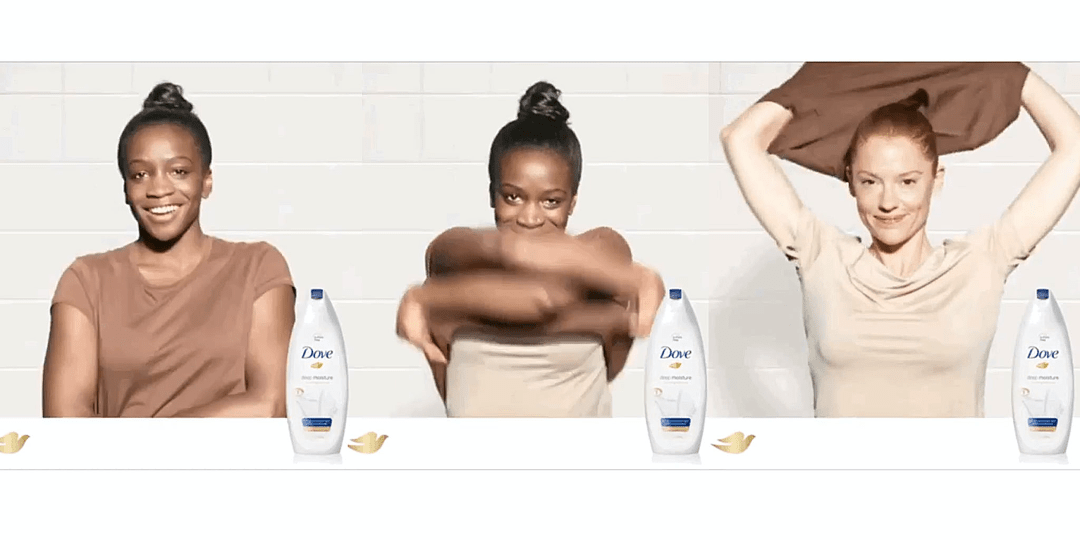 It’s easy to look at an example like this and figure if your brand has never done anything quite so horrific, you’re in the clear. But examples of the role unconscious bias can play in advertising are everywhere, even if they’re less obvious.

Think about the images that you use for ads, websites, presentations, etc. Your photography choices become a representation of your business whether you’re aware of it or not. If you are trying to choose a stock photo to represent professionalism, for example, and the picture in your mind is of a bunch of white men in suits around a conference table, that’s likely the result of unconscious bias.

Marketers have gotten much better at recognizing this kind of bias, although it still rears its head (women laughing while eating salads, anyone?) on a regular basis.

But the next frontier is automation, and that’s where we’re just beginning to understand the effects of unconscious bias on advertising. Machine learning tools like AI and ad targeting can actually reinforce negative bias, in part due to the implicit bias of the architects of these systems. As parameters are built with data segments, advertisers are opening the floodgates for automated systems to perpetuate negative stereotypes.

IBM Watson Advertising released new research findings in January 2022 based on campaign data from The Ad Council that definitively indicated that unconscious biases based on different inputs into campaigns advocating for COVID vaccination were influencing the AI algorithms disseminating the campaign for multiple characteristics including income level and political beliefs.

“One of the most significant observations is: bias can exist in the data and algorithms that are employed for digital advertising, and that bias is not always immediately observable to the human eye.”

This isn’t just theoretical; Facebook recently settled a lawsuit with the National Fair Housing Alliance (NFHA) and Communications Workers of America (CWA) over pre-populated lists on Facebook’s ad platform that allowed advertisers to place housing, employment, and credit ads that could exclude protected groups like African Americans, Hispanics, and Asian Americans. The targeted ad list did not exclude “Whites” in the same way, violating civil rights laws that require a fair and equal approach to advertising for protected groups. 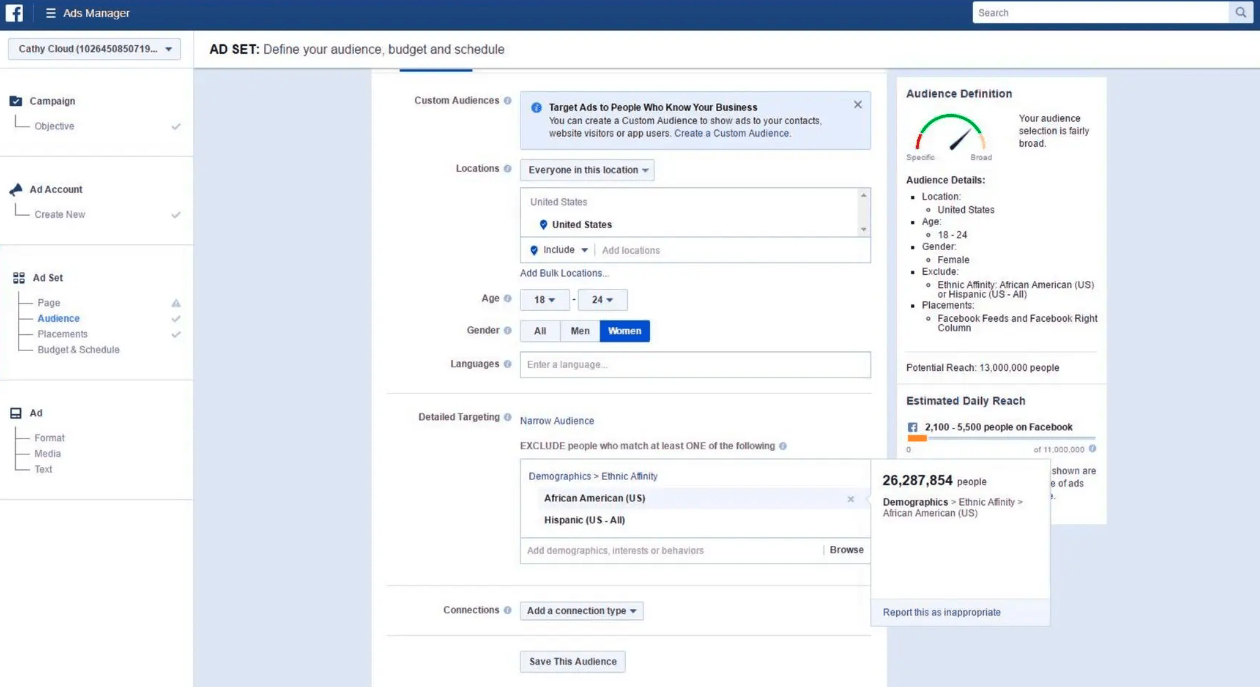 Technological bias can occur when a human cognitive bias or biases in data are unknowingly encoded into the system and distributed at scale. These unconscious biases may become systemic issues that are so complex that they might not be detected, especially in the interaction of data and signals within the advertising ecosystem. 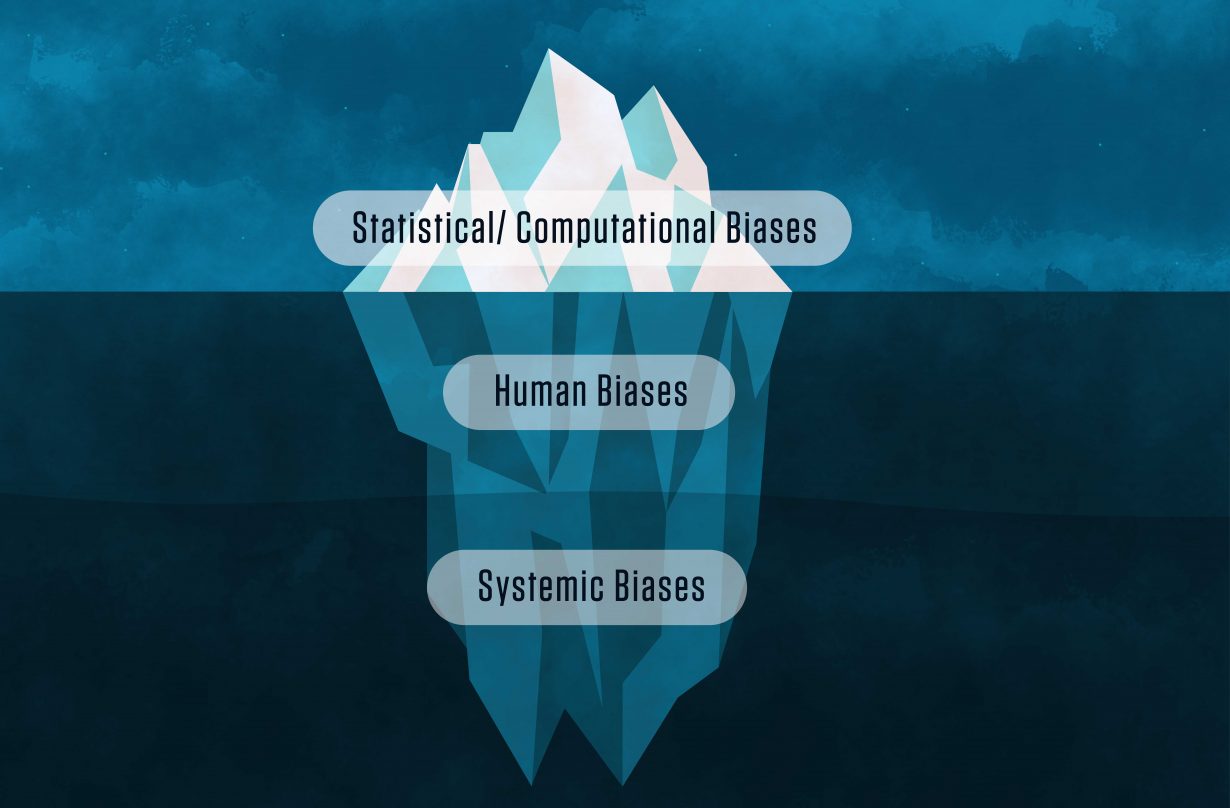 While it may be difficult to detect which biases are reflected in advertising, targeting, and messaging, the onus is on marketing teams to wake up to the issue, actively challenge our assumptions, and prioritize finding solutions.

How do you combat biased advertising?

Regardless of what worked in campaigns in the past, now is the time to step up to the plate and make some significant changes to ensure your brand is taking an inclusive approach and dealing with potential bias.

When it comes to your overall creative process, make sure you:

The publication CMO came up with a useful checklist you should include as part of your creative quality control: 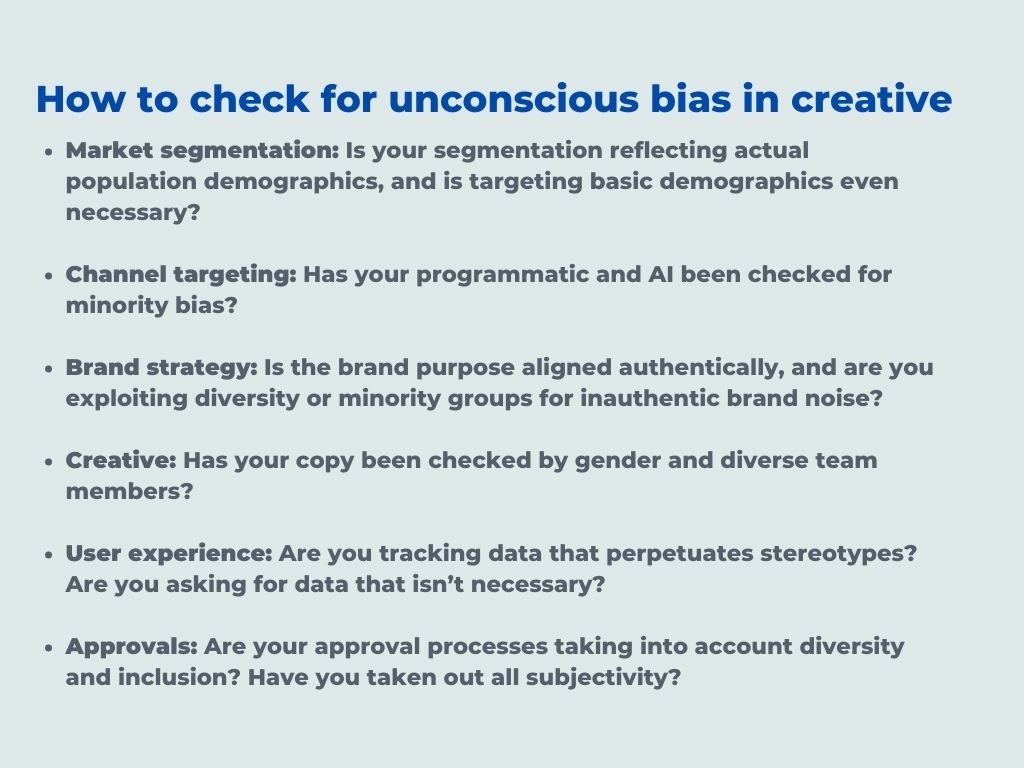 When it comes to algorithmic bias, the solution is a little more complicated. As AI gets more sophisticated, experts in the field are calling for more transparency into how different models and services are developed.

Ironically, technology is often the answer to pushing back and questioning the models we’ve built that can create these flawed, biased outcomes. Check out these tools built to help uncover and mitigate implicit biases in advertising:

Today’s consumers expect more from the brands they choose to interact with. It’s no longer enough to offer your consumer quality products or services; your customers want you to put your values front and center. As consumers get savvier about advertising, take the time to perform a gut check about what you’re putting out into the world.

Learn why today’s consumers align their purchases with their values in the on-demand event, The Marketing Mission: Balancing Social Responsibility and the Growth Imperative.

Ads on Netflix: Should You Jump On This New OTT Opportunity?

Make Or Break: The B2B Customer Experience Will Define Your Growth Potential

Gaming Advertising Trends: Why to Get In Front of Gaming Audiences Now