We’re updating this post with new, important information from Google about this intrusive interstitial update.

In a Google Hangout on October 18th, Google’s John Mueller stated that the intrusive interstitial penalty scheduled for January 2017 only applies to “the interaction between the search click and going through the page and seeing the content.” What this means is that pop-ups beyond that first interaction are not affected by this penalty. So for example, an intrusive pop-up on the second page of a visit would still be fine, as would a pop-up that occurs when a user signals exit-intent. Having this clarification will make adjusting to the new update without sacrificing lead-gen capabilities much easier.

On August 23rd, 2016 Google announced two major changes to mobile search results. The first is that they will no longer be labeling mobile-friendly websites as mobile-friendly since about 85% of all web pages currently meet this standard. The second, more important change is that starting on January 10th, 2017 “pages where content is not easily accessible to a user on the transition from the mobile search results may not rank as highly.” Specifically, websites that use intrusive interstitials and/or pop-up ads that make accessing a page’s primary content more difficult may suffer keyword ranking drops. That said, Google did specify that keyword rank declines aren’t a given; other ranking factors like content relevancy are still more important and so if your page is clearly the best result for a query, you will still show up at the top.

What is an interstitial?

An interstitial is a page or advertisement that is displayed before arriving at the page the user is trying to get to. Common examples include pop-up ads, age verification pages, or pop-ups for legal reasons like cookie usage. For the purposes of this Google update though, the interstitials under fire are not sign-in or legal verification pages, but pop-up ads and banners. 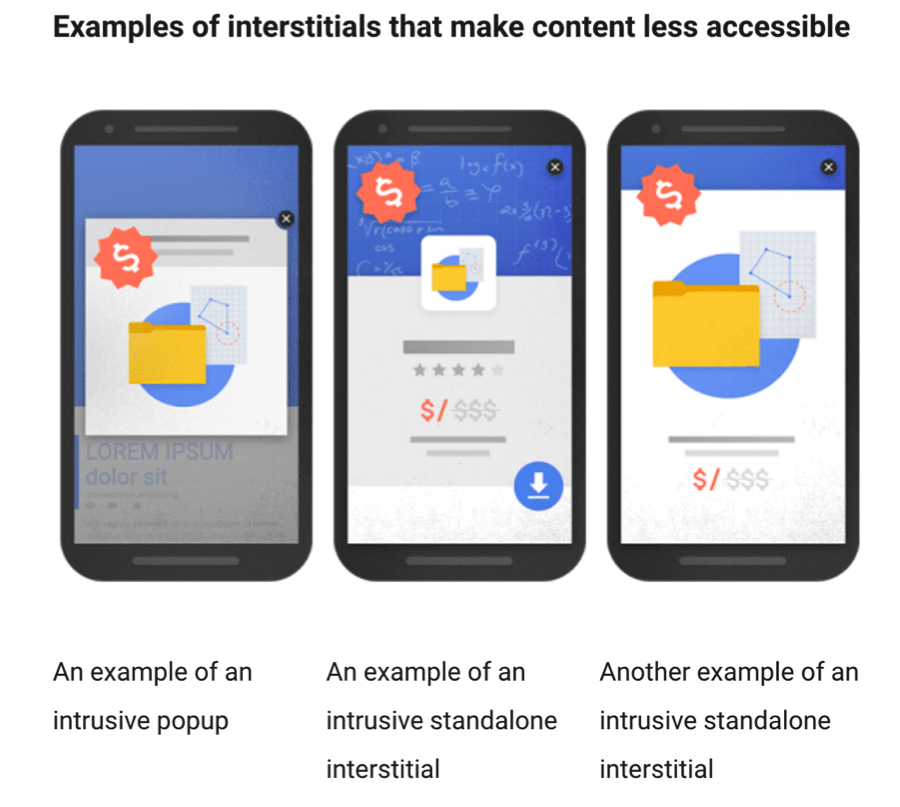 Example from Google of intrusive interstitials

Why is Google doing this?

In short, interstitials are bad for user experience. When someone clicks on your page from the SERP, it’s because they want to see the main content of that page whether it be an article, a product page, etc. They don’t want to be forced to see advertisements that prevent them from immediately being able to view the desired content.

From Google’s perspective, their goal as a company is to deliver the best search results possible and keep searchers happy so that they continue to use the Google search engine. This is just my own speculation, but I imagine the logic behind Google’s move to enforce this new update is as follows: if users are displeased with the results Google serves, they are more likely to switch over to a competitor, which means less ad revenue for Google.

How does the interstitial update affect you?

Unless you are supremely confident in your site’s ability to rank for keywords, you should be working with your dev team to remove all intrusive pop-ups and interstitials from your site by January 2017. And even if you are supremely confident, you should take them out anyways! They’re annoying for users to deal with, even if they do often increase email list opt-ins.

However, you may be thinking to yourself, ‘Okay, I’ll get rid of pop-ups, but then what? How can I still capture leads, display deals, and all the other stuff I used pop-ups for?’ Don’t worry, we have a couple of tips for you.

To encourage users to download your app, consider using App Install Banners. While these banners are nowhere near as customizable as interstitials, they can still be displayed prominently without raising Google’s ire.

While interstitials are currently one of the best ways to get email sign-ups, there are other effective techniques. Having subscription boxes at the top of the page or in the footer, with a compelling CTA (like 10% off your first order with an email sign-up) can be effective as well. You can also capture emails during the checkout process when people are filling in their personal information.

Instead of using a pop-up to display a new deal, you can create a banner ad instead highlighting the promotion on each page of the site throughout the duration of the sale. As long as the banner is well designed, it will still get impressions without annoying your potential customers.