When Netflix reported its first decline in new subscribers in over a decade, it triggered a massive shakeup in the company. The biggest news was the announcement that the streaming giant was finally getting into the ad business, and, as of November 4th, their ad-supported tier is now live in over a dozen countries.

Netflix was making the case to invest to agencies and brands ahead of launch and reportedly already has hundreds of brands on board. But smart marketers are asking some important questions before trying the new offering on for size.

While the potential early adopter advantages are well-known to marketers, don’t get blinded by the shiny new option. You need to evaluate any new platform (even when it’s coming from a market leader like Netflix) on the basis of its initial offering and how well it aligns with your business goals.

For many of our clients, the answer is clear: wait. The current offering is missing some important components that the competition is offering, and there are likely better ways to reach Netflix customers on other channels that are more accountable to your business goals.

So let’s get down to brass tacks and take a look at that initial offering, what needs to happen to make it competitive with other streaming platforms, and what that means for your brand.

One of the first concrete things Netflix announced about its ad offering was its partnership with Microsoft, and it’s easy to see why. In late 2021, Microsoft acquired Xander, an ad tech platform known for its converged TV capabilities. Microsoft also brings a lot of expertise in the gaming space that could unlock new advertising opportunities down the road as Netflix continues to develop its advertising option.

Subscribers to Netflix’s ad-supported tier will see a mix of 15- and 30-second spots, averaging out to 4-5 minutes per hour, a comparable volume to other ad-supported streaming platforms. Ads are non-skippable, and ad frequency is capped at once per hour and three times per day to ensure minimal repetition.

So what are they offering advertisers?

First and foremost, pricing: Netflix is starting with a fixed-price model for ad sales instead of a variable-rate inventory auction, bucking the trend toward auctions in programmatic and likely a result of the race to go-to-market.

Targeting capabilities are limited. Advertisers can only target ads based on programming genres, featured movies and shows on Netflix’s current Top 10 list, and by country. It’s likely that Netflix will offer more advanced targeting at some point in the future because they’re collecting some data like age and gender about subscribers on the ad-based tier. The company hasn’t provided any specific insight into future plans for targeting, sticking to the story that more options will be coming later.

Netflix’s tight-fistedness about their data is legendary in the TV business; while advertisers might be surprised that Netflix has launched an ad tier with zero measurement available, anyone who’s tried to report on Netflix viewership numbers knows this is par for the course. The most basic level of reporting is coming; Netflix has partnered with DoubleVerify and Integral Ad Science to report on delivery and viewability by some point in Q1 2023. At some unspecified future time, the service promises that advertisers will be able to use Nielsen’s Digital Ad Ratings measurement to view their ad reach.

Finally, the audience size: Netflix is not offering any forecast into how many people they think will subscribe to their ad-supported tier.

Will ads on Netflix help your business?

If all of this sounds a bit like a black box, you’re right. And Netflix is entering a very crowded arena; there’s no lack of better-established competitors in the ad-supported streaming space.

So let’s evaluate their offering, starting with audience.

As noted above, we don’t know exactly who will be buying into Netflix’s new subscription tier, nor do we know how many people are likely to subscribe. We do know that Netflix is cracking down on password sharing, which could give the ad-supported tier an initial bump. But they’re also not giving those new subscribers access to the full Netflix content library and they’re limiting video resolution, likely to encourage as many people as possible to buy into their ad-free tiers and protect their existing revenue model as much as possible.

The crystal ball is a bit cloudy, so we decided to take a look at the current Netflix audience and get an idea of how it compares to other advertising channels that are more established. According to GWI data, there’s a considerable amount of overlap with other OTT inventory: Amazon Prime Video (47%), YouTube (46%), and Hulu (44%) are the top three when it comes to current Netflix audience overlap. 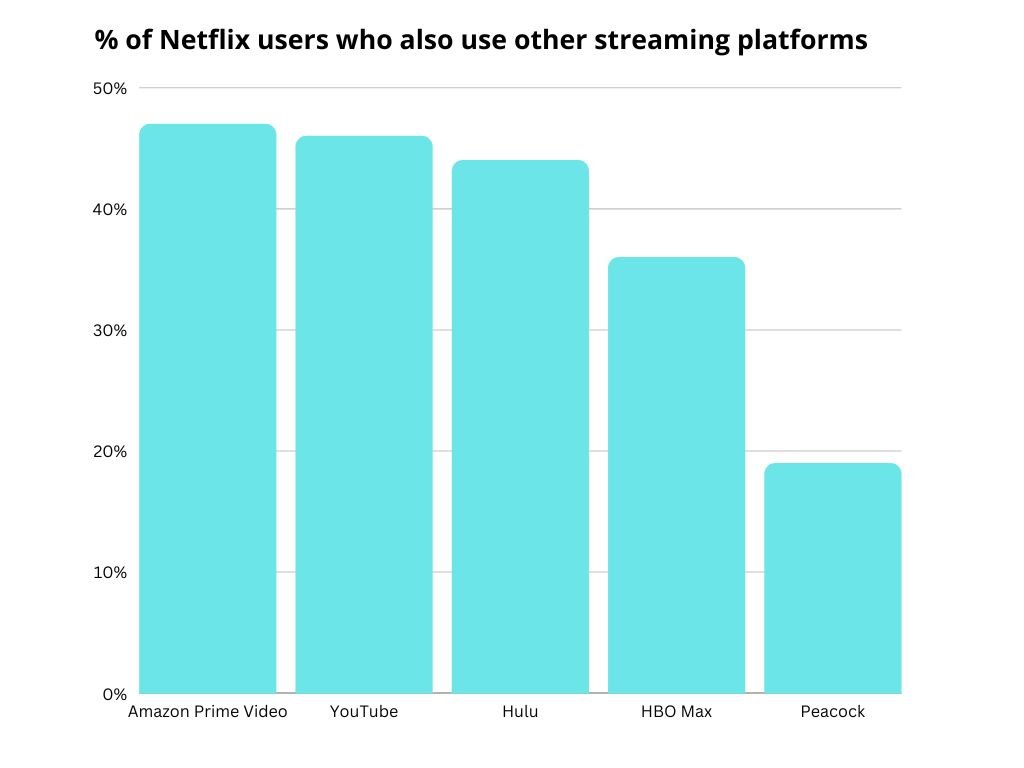 All three offer much more advanced targeting capabilities that ensure ad relevance than Netflix. Since Netflix’s new offering does not include any measurement at all until at least Q1 2023, it goes without saying that all three platforms (all of which include some level of measurement capability) win against Netflix on that score.

But it’s also worth noting that Netflix isn’t just competing with Hulu, Amazon, and the other top-tier streaming names for your dollars, they are also going up against established digital platforms. When you’re considering where to put your budget, you should always be asking where your audience is and how you can reach them as precisely as possible.

We took a look at the major social platforms to get an idea of how much those audiences overlap with existing Netflix subscribers. Facebook led the pack with a whopping 77%, while Instagram (63%) and Twitter (44%) snagged second and third place. 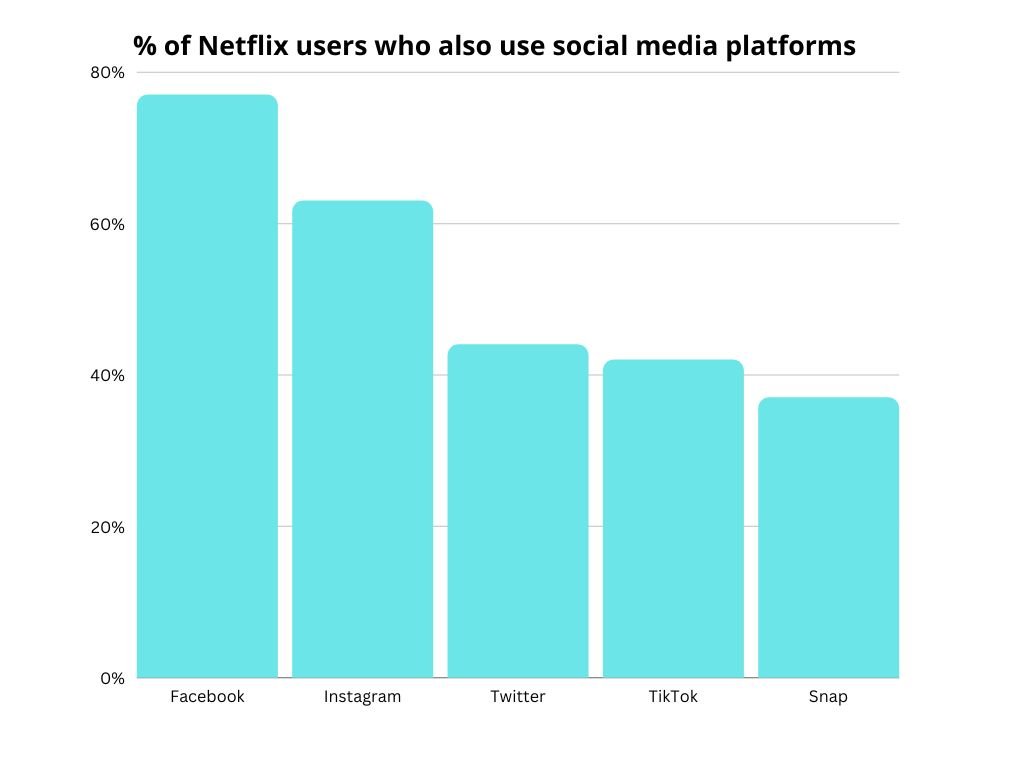 Of course, you shouldn’t define your media mix solely by capabilities; OTT ads are a different animal than social ads and may be tied to different business outcomes and performance expectations. But it’s important to know that there are many options out there in both the streaming and digital landscape.

The challenges go beyond an oversaturated media marketplace.

Netflix viewers are used to watching their favorite movies and TV shows without interruption. Let’s be clear: consumers who are used to an ad-free experience aren’t going to love the change. Ads will feel inherently disruptive during this preliminary period, and you should be prepared with creative that is sensitive to that fact.

Should you invest in ads on Netflix right now?

It is very early days for Netflix advertising, so let’s take a look at the big picture first.

In July 2022, streaming surpassed linear viewing for the first time. Netflix is still at the top of the mountain of streaming options, and advertising on the service will likely present a big opportunity for marketers… in time. 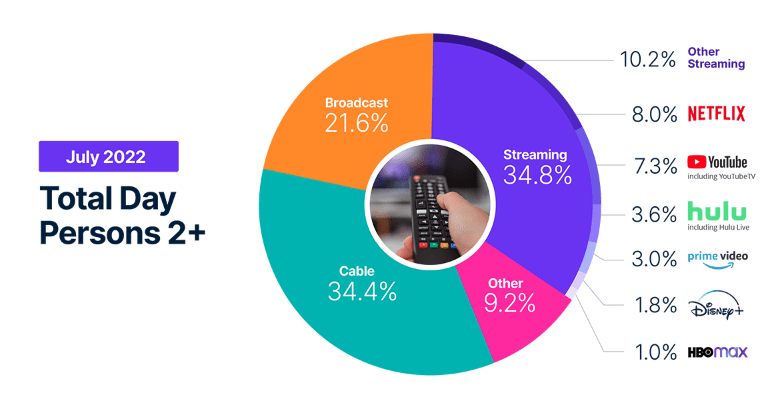 But we recommend proceeding with caution right now.

Netflix has some significant challenges to work through around targeting and measurement capabilities that make it difficult to put together a reliable model or accountable strategy for ad spend on the platform right now.

Wait until there are other buying models, better audience targeting capabilities, and more measurement visibility. Don’t overcommit to a platform that’s underbaked at the moment when there are so many other platforms to choose from. Remember: your goal is to serve the right ads to the right audiences. That will be hard to accomplish on Netflix right now.

Even if you’re successful, you won’t really know because there’s so little visibility. To even judge the opportunity accurately, you need to get a deeper understanding of the incrementality versus other OTT inventory given the high propensity of overlap.

Those other OTT platforms are also ahead of Netflix in other ways. The streaming marketplace is prioritizing ad innovation like shoppable videos and QR codes with ads to drive engagement and conversion. Netflix is nowhere near that level; they’re just building out their offering on mid- and pre-roll advertisements.

But that doesn’t mean they won’t get there, or even outpace the competition in the future. By Q2 2023, the picture around Netflix’s offering should be much clearer. As the ad-supported tier matures and data starts flowing, we’ll get a better idea of how Netflix plans to compete with major players like Disney, Viacom, and Google. Then it will be time to reevaluate Netflix for your business to decide if it’s the right fit.

Learn how to invest in TV that drives measurable business growth with our guide What’s The Deal With Converged TV? The Case For Performance Branding.

Best of the Blog: The Most Important Insights from 2021

Experts Share Black Friday 2022 Predictions Ahead of the Holiday