As marketers, we all strive to have the best and the most attention-catching marketing campaigns out there. That often means trying to go viral in the flashiest way possible.

Maybe you’ll use humor and try to get social shares and traction through laughs, or instead go for sleek, stylish, modern design that gets people talking and sharing just through sheer admiration for the beauty of your creation.

White Paper
The Future of Creative Is Collaborative: Build Creator & Influencer Partnerships Into Your 2023 Strategy
People respond to other people, and smart brands are investing in powerful collaborations as a critical part of their creative strategy.
Download White Paper

Sometimes, though, online marketing veers into the realm of just plain weird, so out there that all you can do is stand back and wonder who on earth put their stamp of approval on these campaigns.

Sometimes these exercises in the utterly bizarre are a total hit, and sometimes, well, not so much. Here are five of the strangest online marketing campaigns on the Internet.

Back in 2009, Burger King caused a huge media frenzy when they kicked off their Whopper Sacrifice campaign. It wasn’t exactly what it sounded like; no one was sacrificing any Whoppers. Instead, they were sacrificing for Whoppers. Precisely, Facebook users were downloading an app that prompted them to actually delete ten of their Facebook friends in order to get a coupon for a free Whopper. Even better, the app would alert each of those ten friends that they’d been sacrificed for a bite of fast food – and the app informed the heartless sacrificer that their soon-to-be-ex-friend would be told.

The campaign turned out to be a huge success, with over two hundred thousand people sacrificing their friends in the name of roughly forty cents’ worth of burger before the app itself was sacrificed on the altar of Facebook. The company protested that the app violated the site’s privacy clauses by informing users of the friend removals, a function that overrode Facebook’s existing mechanic of simply removing a friend without that person being informed of the removal. However, the app was also massively controversial and generated a considerable amount of negative press surrounding the concept of giving your good buddies the ax in the name of delicious but oh so transient meat. Burger King was unrepentant about the stunt, but never made plans to revive the app on any other form of social media.

That is pretty much exactly what it sounds like. Poo Pourri, a product designed to make your bathroom smell a little fresher after each, ah, use, was already on the market and apparently selling pretty well in 2013. But they wanted to reach a broader market, so they set their sights on an attempt at going viral. To do this, they hired a prim and beautiful actress with a proper Queen’s English accent and had her tell poop jokes (featuring such gems as “You would not believe the motherload I just dropped”) in a two minute commercial that got posted to YouTube. 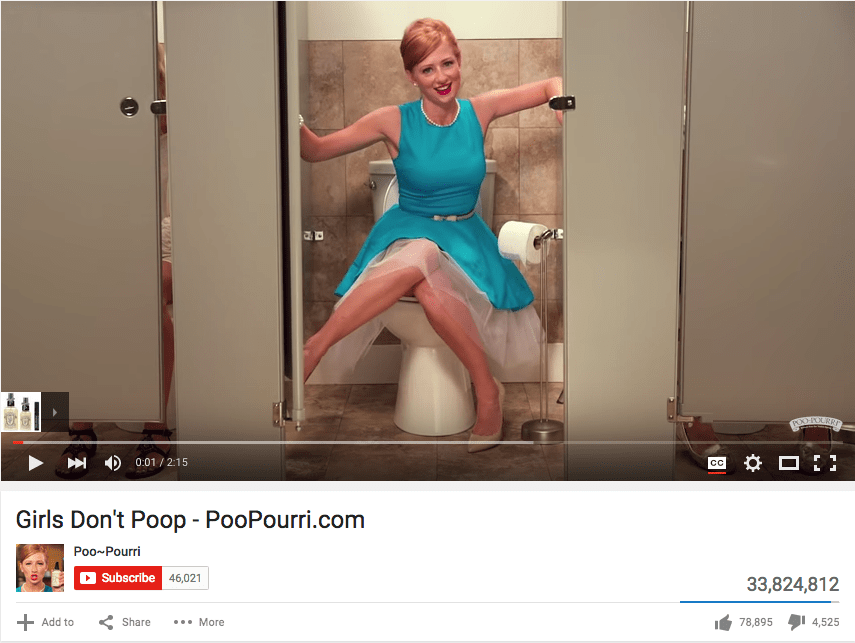 It was a smash success. To date, the video has racked up thirty-three million views and seen several follow up videos as well as a huge increase in sales. The product is now well-established and can be found in stores like Walmart and Bed Bath & Beyond, as well as on websites like Amazon. The fact that the product actually does really work according to a plethora of reviews plus the crass, cheeky humor of the viral video spawned a cult following that gave Poo Pourri life. Weird? Yes. Bordering on bizarre? Most definitely. Successful? Yeah, that too.

Yes, Burger King makes this list twice. (They’ve done more strange things over the years than would be efficient to recount.) The Subservient Chicken is a pretty old campaign, harking all the way back to 2004, but it’s so far flung from the realm of normal and into Twilight Zone reaches of unbelievably outlandish that it’s worth adding to this list. Though at first Burger King’s involvement was kept a mystery, the Subservient Chicken was designed to be a campaign to get people interested in the fast food chain’s TenderCrisp chicken sandwich. Users could navigate to the Subservient Chicken website, where a low quality video of a man in a bedraggled chicken suit standing in a nondescript living room would load. Users could then enter a series of commands into a prompt below the video in order to see the chicken man do certain actions. Valid commands included “moonwalk,” “backflip,” “die,” “breakdance,” “Walk Like an Egyptian,” and “Cabbage Patch.”

Though the site was apparently pretty popular, racking up 46 million hits in a week according to a ClickZ blog post from the time, it was too strange an effort to be believed and one that many found disturbing due to the nature of the chicken suit and some of the more questionable commands that could be demanded of the chicken man. The campaign eventually died a quiet death, only to be revived again in somewhat more streamlined and less eccentric form in 2014 to promote yet another sandwich. One can only wonder who at Burger King came up with this idea and, honestly, why.

Keeping in the theme of fast food brands being just a little bit on the wacky side, the Canadian arm of Pizza Hut decided to have a little fun on Facebook back in 2012 by posting a certain question to its eager fan base: “Do you love the smell of a box of Pizza Hut pizza being opened?”

The post got inundated with responses, and just shy of two months later, Pizza Hut Canada decided to make good on their promise of pizza perfume when their Facebook Page hit the coveted 100,000 followers mark: they actually created 100 samples of the pizza perfume, aptly named Eau de Pizza Hut, and sent it to the first 100 people to message them on their Facebook account. That post, too, was a huge hit, racking up a ton of shares, likes, and comments for the account. The scent itself was apparently pretty popular as well. Who knew everyone wanted to smell like a hot, fresh slice of pizza all the time? As weird as it was, the spontaneous campaign worked out for Pizza Hut Canada, generating a sudden but well-earned burst of publicity and a ground swell of good will that was both totally organic and swiftly went viral due to the sheer oddity of a Pizza Hut perfume existing.

It’s hard to know where to begin with social media for Denny’s. It isn’t just one single campaign of theirs that’s strange at any moment in time. For pretty much as long as Denny’s has had social media, they have pushed the boundaries of what it means for a big name brand to be as surreal as possible while still attracting customers. They seem to know that their biggest fans are drunken college students craving pancakes at 3 AM, and they pander to that crowd with aplomb and comedic perfection:

Their entire Twitter is absolutely teeming with messages just like this. Their Tumblr is just as bad, if not actively even worse, because on Tumblr Denny’s gets to use gifs. One fan favorite pastime on that social network is to submit photos of themselves and request to be “Denny-fyed.” The brand obliges by turning something in the photo, be it something as small as a feature in the background or as major as something about the person themselves, into tasty breakfast food instead (usually bacon). It’s zany to the max, but it works: the diner chain is unquestionably popular, with 250,000 followers on Twitter and each Tweet often getting hundreds if not thousands of retweets.

There you have it. There is far more weirdness out there, but these are some of the strangest campaigns the Internet has to offer. Some of these examples turned into big successes for the brands that gave them a shot (like Poo Pourri), and some of them generated a bit more negative PR than the brand in question was probably aiming for (looking at you, Whopper Sacrifice). But all these go to show that weird isn’t necessarily bad. Sometimes thinking way, way, way, way outside the box in your online marketing campaign can pay off.

Reaching Beyond The Typical Use Of Hotel Guest Data