Pride month may only come along once a year, but that doesn’t mean that you can’t work towards a better understanding of the LGBTQIA+ community all year long. To ring in the new year, WproPride, Wpromote’s LGBTQIA+ employee resource group, hosted an event about transgender representation with We Create Space, a non-profit social collective of queer leaders that works to connect communities with tools, knowledge and support networks for change and growth.

Diversity and inclusion specialist Ben Pechey provided a state of the union on gender, identity, and representation of trans and non-binary people in the media, something that should be front of mind for brands and marketers as they prioritize inclusion in campaigns.

Why representation is more important than ever

Whether it’s in movies, TV shows, books, or even ads, people want to see themselves in the media they consume. When people don’t feel represented, individuals and even entire groups can feel alienated and isolated.

According to Ipsos’s LGBT+ Pride 2021 Global Survey, those who identify as transgender, non-binary, non-conforming, gender-fluid, or other than male or female make up 4% of Gen Z compared to 1% among all adults. Younger adults are also significantly more likely to identify differently than heterosexual and to say they are equally attracted to both sexes.

When you compare the data to the report’s straight respondents, it’s wild to think of how underrepresented this group is in marketing. 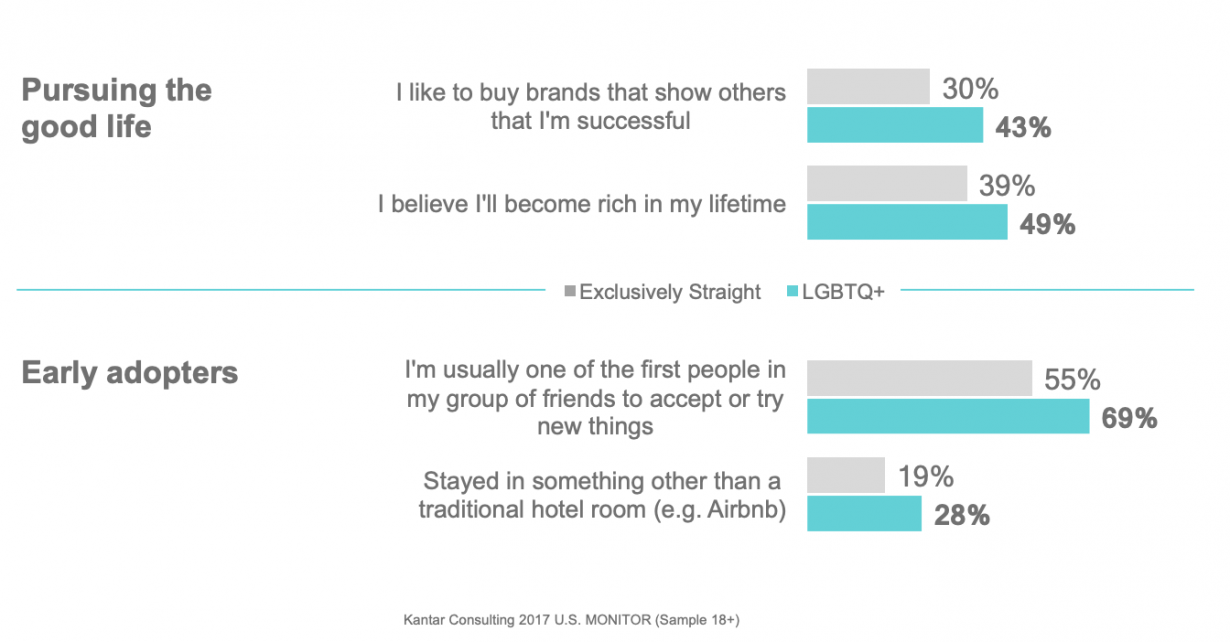 Adweek reported that “35% of the top 100 U.S. companies directly targeted LGBTQIA+ consumers with ads” in 2004. While representation has increased since then, that expansion has largely focused on orientation, not gender identity.

This has been a huge struggle for non-binary and trans people. And what little representation in media they do have is all too often negative.

Over a ten-year period, GLAAD cataloged 102 episodes of television that featured transgender storylines and found:

The narrative is just now beginning to shift, as more and more people are beginning to understand that the transgender and non-binary stereotypes we see so often in the media represent a very limited, often inaccurate perspective of the trans community.

In 2022, Pose’s Mj Rodriguez became the first transgender actor to win a Golden Globe in the ceremony’s 77-year history. “This is the door that is going to open the door for many more young talented individuals,” Rodriguez shared on Instagram.

While Rodriguez’s win is exciting, Pose is also set in a violent and traumatic time in LGBTQIA+ history. Transgender characters are still often relegated to these kinds of storylines, which significantly limits the scope of transgender representation in media.

That doesn’t mean shows like Pose aren’t valuable or worthwhile, it just means that there’s still a long way to go when it comes to a fully realized scope of representation for trans and binary characters in media across all facets of their lives and in many different roles.

Recognizing the issue and advocating for change is one small step cisgender audiences can take to be an ally to the trans and non-binary community.  For brands and businesses, this includes looking to the future of the marketplace by engaging with the community on their terms.

Exploring what it means to be the T in LGBTQIA+

That’s what’s so wonderful about the trans community, it’s so multi-faceted, it’s so deep that when we say trans, we don’t just mean a person. We mean a community.

Understand identity on a personal basis: think ‘each individual I meet has an individual stance on their identity, so I will start trusting and going with what the person says in front of me, instead of a set of assumptions.

Pechey’s key takeaway is that there isn’t one right way to “be” an identity or understand the nuances and complexities of said identity. It’s up to each individual to understand where they fit on the spectrum of gender and what pronouns they’re most comfortable using.

What’s the deal with pronouns, and why do they matter?

An extremely important part of the “trans puzzle” are pronouns. Pechey explained that “pronouns are the way we describe ourselves or how we refer to someone else in conversation.”

Back in school, you probably learned that pronouns are just handy substitutes for nouns. But that’s not all they are. They’re a written form of your identity that continues to represent you when you’re not in the room. Pechey recommends that we think of pronouns as “the holding card of who we are as a person.”

Misgendering occurs when someone is referred to by the wrong pronouns. Typically, misgendering can indicate a couple of different things: purposeful lack of respect, maliciousness, or ignorance, willful or otherwise.

This can happen anywhere, although the Kantar study reported that 40% of LGBTQ+ respondents experienced discrimination on social media, where people can hide behind anonymous avatars.

What cisgender people might see as a simple mistake can demonstrate a lack of respect and change the equity of a conversation. Pechey described their own feelings when they’re misgendered: that they’re “no longer being given the same dignity, rights, and access to the conversation that’s happening in the room.”

It’s true that mistakes happen when it comes to pronouns. But the onus is on the speaker who has misgendered someone to apologize and, even more importantly, learn from the mistake and make the change. It does not open the door to a longer conversation, and you should not expect a trans person to act as your therapist and teacher in the aftermath.

Which pronouns you use and how you identify are only part of the complex spectrum of gender. Other aspects include societal gender roles, gender expression, gender attribution, and gender identity.

The distinction between gender roles, gender expression, gender attribution, and gender identity might seem complicated, but understanding the difference can help people understand the relationship between sex and gender.

Gender roles are behaviors deemed acceptable by society based on traditional male and female archetypes. Antiquated ideas typically associated with gender roles include women belonging in the kitchen while men work, girls liking pink and boys liking blue, and only women being allowed to wear makeup or dresses.

Gender expression is the way in which a person expresses their gender identity, whether that’s through clothes, appearance, or behavior. “Gender expression is how you mess with your gender role,” said Pechey. “Because what we say and do is always second to how we look and appear to other people. Because we say a lot before we say anything.”

Gender attribution is the act of categorizing other people into a specific gender-based on your understanding and/or acceptance of both societal gender roles and an individual’s gender expression. The human brain automatically sorts people into groups, even when you try not to, but you should be aware that it’s not necessarily accurate because it’s based on sets of assumptions.

Finally, gender identity is an individual’s internal sense of what gender they are. Individuals can have a strong sense of self at a young age which frequently includes gender identity. It’s important to note that the sex you’re assigned at birth does not determine your gender.

Even if you’re not a member of the community, your allyship is valuable

Being an ally isn’t always easy, but it’s crucial not to center yourself in conversations about the trans community. It’s your responsibility to listen first, then support and amplify trans voices.

That’s part of the reason representation is so essential; it’s all too easy for cis allies to take the spotlight because trans and nonbinary individuals are so often portrayed as victims or tragic figures in the media the general population consumes. Allies exist to strengthen the impact of advocacy by the community itself.

There’s not an exact right way to be the “perfect ally.” Instead of worrying about everything you should probably be doing, break it down into specific steps, including:

When we’re complacent, when we’re comfortable, we don’t do anything. Why would we? But when we feel discomfort or are unhappy about a situation, we change stuff. And that’s what’s brilliant about it. So use your comfort level to make some changes.

See how you (and your brand) can think more inclusively all year round with Not Just Pride: 5 Questions You Need To Ask When Crafting LGBTQIA+ Digital Marketing Campaigns.

Every Day Is International Women’s Day: Learn From 5 Female Leaders Who #ChooseToChallenge