Google’s algorithm never sleeps, and one of the responsibilities of a great SEO is keeping up with the barrage of announced and unannounced algorithm updates and trying to decipher what’s actually changing and how the update is affecting organic performance.

In May 2022, Google rolled out the first major core update of the year, and SEOs everywhere started analyzing the data to figure out the actual impact. Core updates take a minute to settle in and the long-term effects aren’t always immediately apparent; at Wpromote, we leverage aggregate data across our clients over time to make sure we can more accurately pinpoint the effects of the algorithm vs. other potential sources of SERP volatility.

Data providers like SEMrush reported extremely high rank volatility (measuring 9 and higher on a 10-point scale) on the day the May 2022 core update rolled out, comparable to the November 2021 Core Update. In the week after, SEMrush found that 17% of pages ranking in the top 20 pages had ranked lower prior to the update.

White Paper
Earned Media Is Growth Marketing: The Performance Marketing Approach to Content + SEO
Learn how a performance approach to your earned media can help you get immediate results and scale.
Download White Paper

We looked to these initial analyses and anecdotal information across the industry to form a hypothesis: we posited that rich results on the SERP were affected by the update, and different kinds of information might be surfacing across query categories as Google continues to build out enhanced, one-stop shop SERPs (including increasing the amount of zero-click results for some queries).

To test that hypothesis, we analyzed our proprietary client data for April (pre-update) and June (post-update) to identify statistically significant changes.

After the May Core Update, Google appears to be shifting where and how specific SERP features are appearing in search results

We started by looking at how often some of the most common rich results appeared on the SERPs before and after the update. 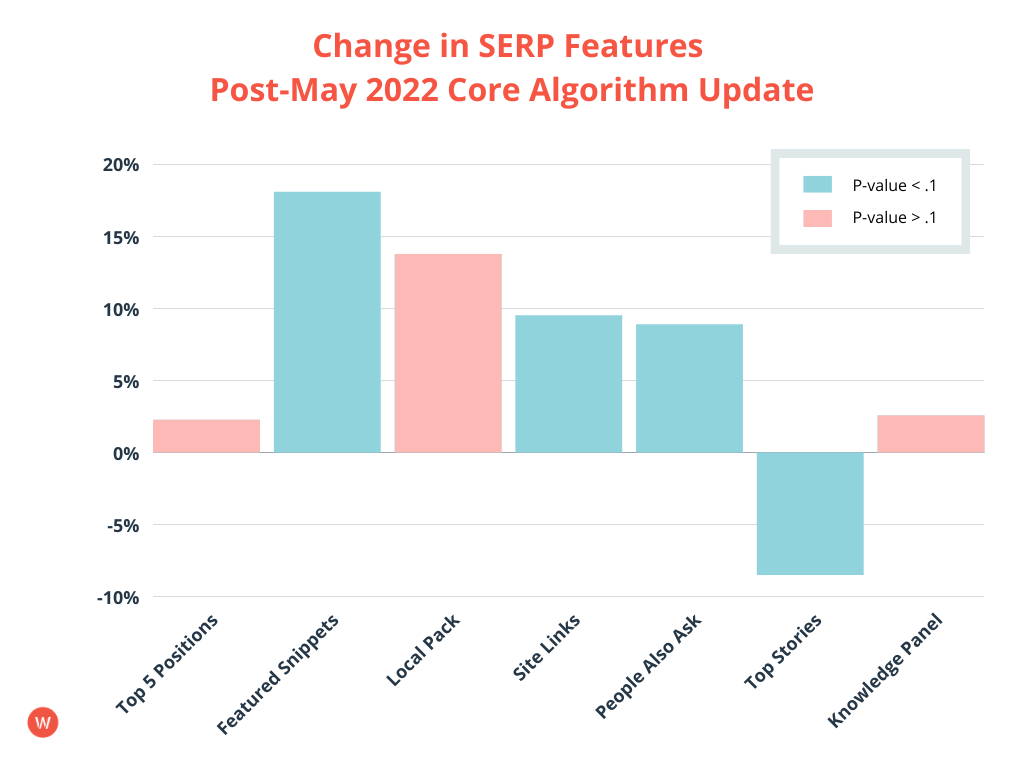 To determine statistical significance, we did a two-tailed T-test comparing SERP feature results for April vs. June. If the P-Value was less than 0.1, the results were found to be statistically significant at a 90% confidence level.

We found 4 SERP features that showed a statistically significant change (more than 95% confidence): Featured Snippets, Site Links, People Also Ask (PAA), and Top Stories. We can’t say with 100% certainty that the algorithm update directly caused the changes, but there is a clear correlation. Whether or not these SERP features were specifically targeted, there was a noticeable change in how frequently they are now showing up on results pages.

To make sure our clients were prepared to respond to these changes and adjust our organic strategies accordingly, we dug further into each of the SERP features. We decided to break down all of our findings by industry to identify potential opportunities and risks.

What we learned was sometimes surprising; for example, the 9.5% average uptick in Site Links results (which surface several different pages of a site to click into so users can easily find what they’re looking for) after the update occurred almost entirely in the food and beverage category.

That represents an opportunity to capture a bigger share of the SERP pie for relevant keywords in that vertical, particularly because Site Links take up more space on the page and push the competition further down. Marketers can take action to get the advantage and prioritize earning Site Links on the SERP by making sure their site architecture is easy to navigate and leveraging structured data like breadcrumb schema.

Featured Snippets are so hot on the post-core update SERPs, especially for fashion and apparel

Other SEO data watchers have pointed out the higher prevalence of Featured Snippets post-May algo update, and we found that our clients’ content was appearing in Featured Snippets a whopping 18% more often, the biggest increase across the rich results we analyzed. 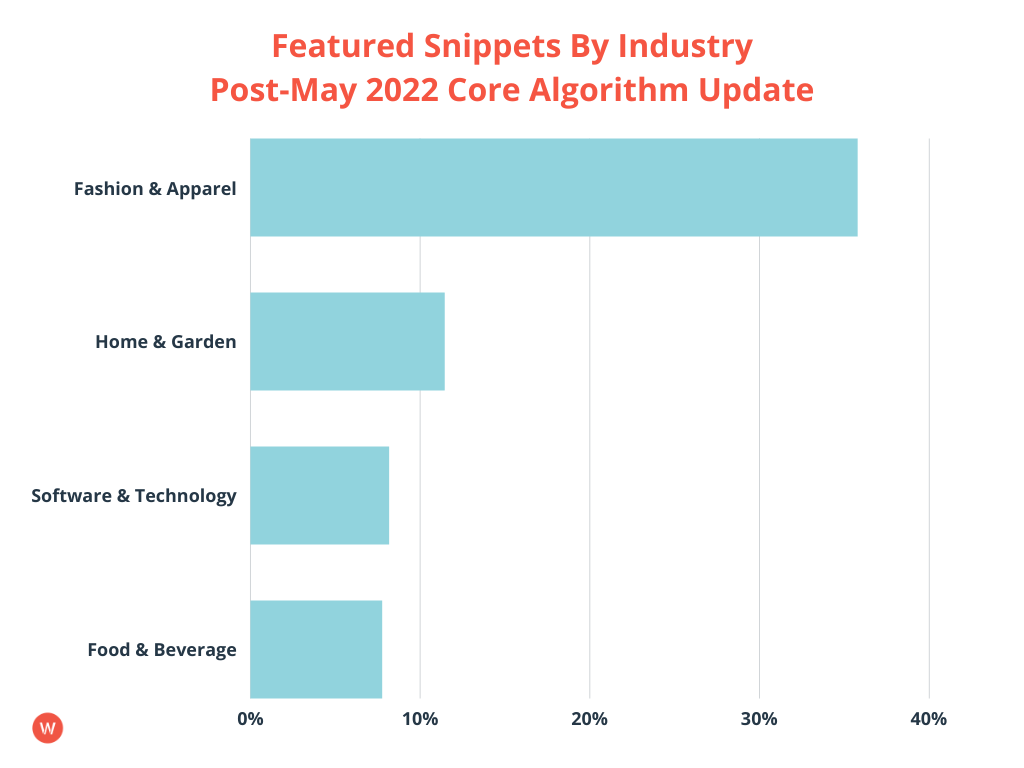 That doesn’t mean that every fashion brand and retailer should start rewriting their organic playbook, but it does mean that prioritizing content most likely to rank for Featured Snippets and structuring content to optimize for the frequently question-focused SERP feature will probably boost organic presence in search results and drive up the potential for organic conversions.

Not all of our findings revealed new opportunities associated with the May core algorithm update; we saw an 8.5% drop in Top Stories across our clients’ results, but some industries were hit much harder than others.

The vast majority of that Top Stories decrease came from SERPs across three industries: home and garden, retail and shopping, and software and technology. It’s likely publishers and sites heavily reliant on informational content associated with those verticals have taken a big hit and seen a significant decline in organic performance.

To make up for that lost visibility, SEOs and content marketers for impacted businesses need to double down on high-quality, helpful content and make sure their sites are free from any technical SEO issues that could hurt performance. The only path to regaining that ground is by recommitting to strengthening the foundational components of a successful organic marketing strategy.

Our data revealed a 9% increase in People Also Ask results for our clients a month after the May update, particularly concentrated in the fashion and apparel, food and beverage, and software and technology categories. 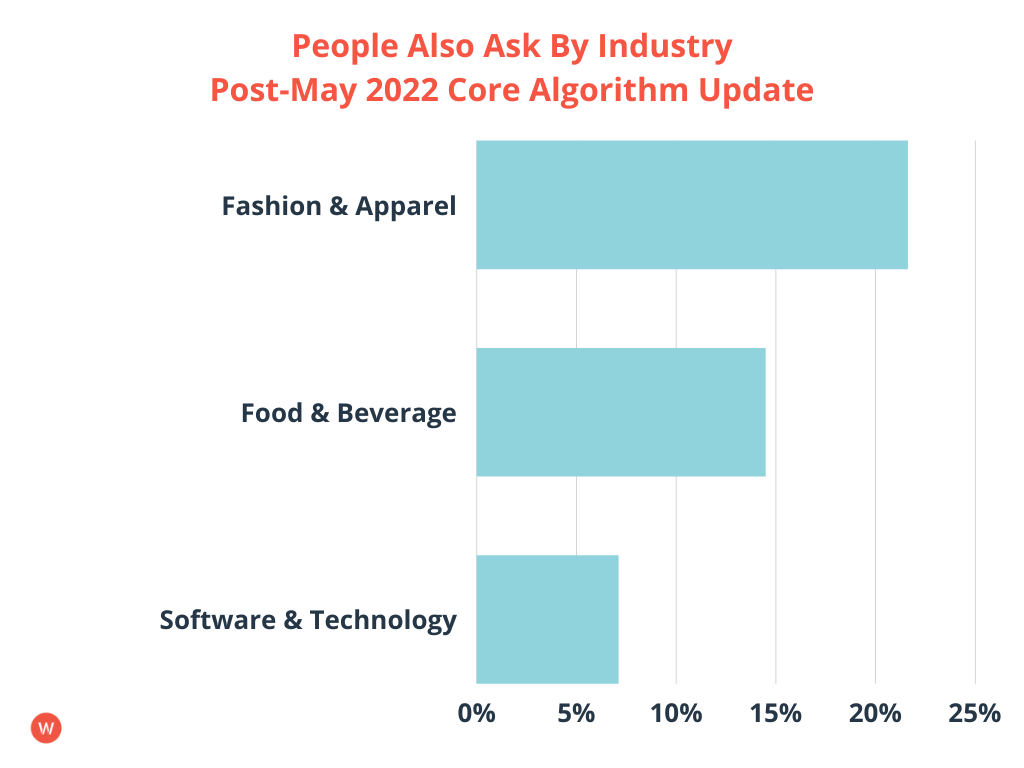 But that’s not the whole story: RankRanger, SEMrush, and seoClarity all recently reported that the People Also Ask feature appeared 30-50% less often in the month of July. These big shifts in PAA results offer evidence that Google could be testing this particular SERP feature and more changes are likely to come for PAA.

As Google continues to tinker with the SERP across algorithm updates large and small, it’s important for organic marketers and businesses to remember to keep their eyes on the fundamentals.

Looking forward: how to deal with the Google algorithm updates in 2022 and beyond.

It’s important to pay attention to the effects of algorithm updates and make adjustments where they make sense to maintain and grow organic visibility and performance for your brand, but at the end of the day the quality and accessibility of your content will outweigh any tactical adjustments.

If you aren’t producing content with strong E-A-T (Expertise, Authority, and Trustworthiness, the Google gold standard) or your site is rife with technical SEO errors that make it difficult for web crawlers to understand, the actual impact of those adjustments will be minimal. Get the basics right, then get granular about optimization.

As everyone who works in digital marketing knows, the only constant is change. Google seems to announce a major algorithm update every few months, and it can seem impossible to keep websites up-to-date. The thing to remember is that these updates aren’t random; they’re intended to improve the search experience, and that’s good for your organic marketing (and your business) in the long run.

So the next time you notice your site might have been impacted by an algorithm update, you’ll know what to do:

Explore how to take a growth marketing approach to SEO and earned media and give your business a significant competitive advantage on the SERP and beyond.