TOMS.com, a leading manufacturer of men and women’s shoes and pioneer of the one-to-one movement, was looking for an agency to help optimize their newly designed website and to preserve their organic rankings upon launch. With the ultimate goal of ranking higher for not only brand terms but generic terms as well, TOMS 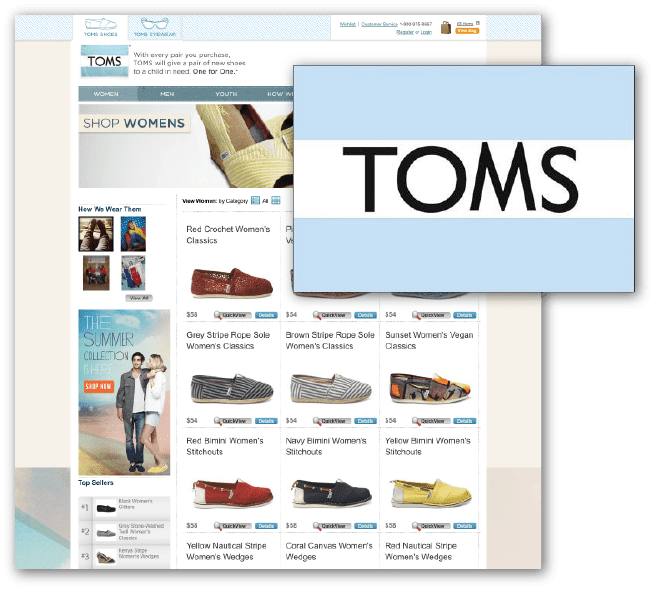 needed an agency who could assist with the transition to the new site, handle high volume traffic issues, and also manage ongoing search engine optimization after launch to grow their stature in the search engines.

With a new website soon to be launched, we would need to work closely with their programming team to ensure the website was fully optimized prior to launch, to preserve all existing rankings and establish a solid SEO foundation to build from.

TOMS also had a special opportunity to be featured in an AT&T commercial spot. This required the launch date of their site to be changed to 2 months earlier. In addition to working with a tighter launch schedule, we would need to prepare the site to handle the high volume of traffic and maximize the SEO benefit that would come from the commercial.

To begin, we met with their design and programming team and reviewed the new site for any potential roadblocks.  After discussing their goals and performing a comprehensive keyword analysis, we advised them on precise URL structure and meta information for all pages, so that they could start ranking for the desired targeted brand and product terms immediately following launch.  This also included requiring their product pages to have static links to ensure they were crawled by the search engines and properly ranked.
During the launch process, proper 301 redirects were implemented for all URL changes that were made to maintain rankings and inbound links.  We then meticulously reviewed the URLs to ensure that 404 error messages would be avoided, in turn helping to sustain or increase the number of inbound links. 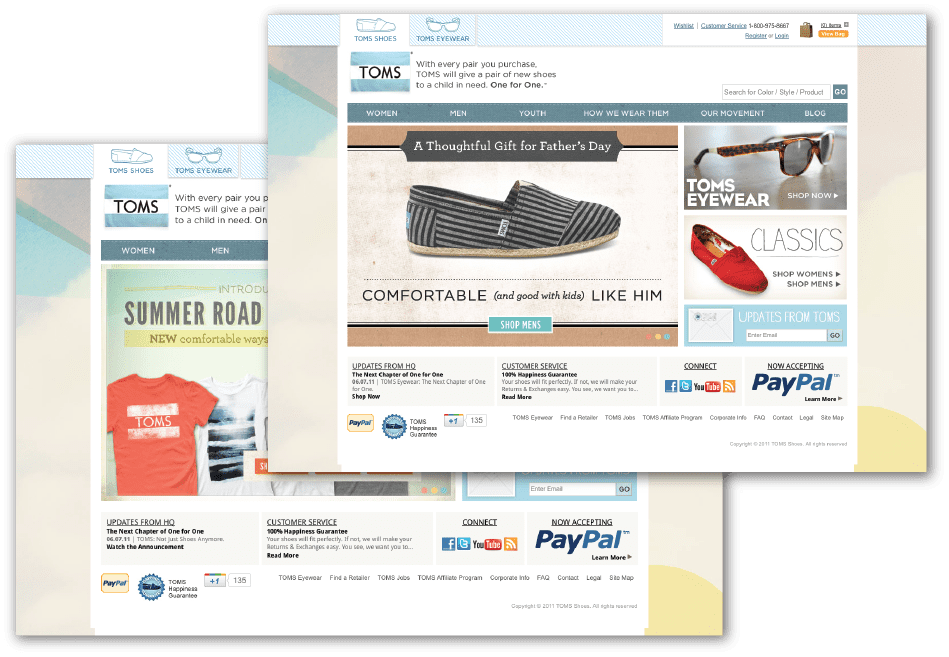 After the site launch and during the airing of the commercial, a traffic influx plan was set in place.  In order to avoid the site from being bogged down or going offline, some of the traffic was offloaded to other servers using multiple homepage URLs.  Using newly released techniques, we directed Google and other search engines to crawl the ‘canonical’ version of the site’s homepage in order to avoid duplicate content problems associated with having multiple homepage URLs.

After the launch, a strategic ongoing SEO plan was carried out to further increase overall site traffic and rankings for targeted terms.  In addition to continued onsite SEO and adding new copy to the site, a comprehensive link building campaign was developed to increase the sites popularity within the search engines.  The campaign included strategic outreach to shoe and fashion blogs, requesting links from targeted keywords they were aiming to achieve higher rankings for.  Another link building strategy was setting up Google Alerts and monitoring conversations being had about TOMS. Reaching out to bloggers and sites that were already speaking out about TOMS, was a great tactic in receiving valid links, as fans are typically more than happy to tag targeted keyword links for better optimization, they felt like they were helping the charitable nature of the company.

Lastly, Wpromote would develop backlinks to TOMS through the creation of image badges embedded with code that would directly hyperlink to TOMS site. Badges are akin to icons such as “PayPal Verified” or “BBB” which users place on their websites to create a sense of community.  These badges successfully generated new inbound links with proper structure and anchor text keywords to TOMS, giving them more authority and better rankings in the search engines.

TOMS saw overwhelming improvements in their traffic and organic rankings after the launch of their new website. The transition from their old site to their new site was completed smoothly and all rankings were preserved through proper 301 redirects.  During the airing of the commercial, the site was able to withstand high volumes of traffic without the search engines penalizing the site for duplicate content.

Starting the new site off with a solid SEO structure set them up for unprecedented growth in the search engines.  With proper URL structures and metas in place and with ongoing site optimization, TOMS now ranks #1 for all keyword variations of their brand terms, which accounts for more than 88% of their total organic search volume.  They are also now ranking #1 for many of their product terms, driving thousands of additional visitors to their site each month.

The Increase in overall traffic to the site has been the most dramatic achievement.  Prior to the launch of their new site, TOMS was averaging about 10,000 visits per day.  This number has risen substantially over time with the airing of the commercial and continued site optimization.  In April of 2009, after the launch of their new site, TOMS saw a daily traffic peak of over 115,000 unique visitors, an 1100% increase.  Today, TOMS receives an impressive 820,000 unique visitors to their site per month.

TOMS was founded in 2006 by Blake Mycoskie on one simple premise: With every pair you purchase, TOMS will give a pair of new shoes to a child in need.  One for One.  During their first year of business TOMS sold 10,00 pairs of shoes, and as of April 2010 they have given over 600,000 pairs of new shoes to children in need.  In 2009 TOMS was awarded the ACE award recognizing companies’ commitment to corporate social responsibility, innovation and exemplary practices worldwide.

Girl Vs. Internet – In Plain Site: A Conversation About Site Design