We’ve established that structured data, or more specifically schema markup, is a great tool in a webmaster’s organic search arsenal. It can help clarify otherwise ambiguous terms that search engines can’t inherently understand and link relatable qualities to the main topic, making for a semantic network of defined elements. However, like most developments on the internet, there are multiple ways of incorporating schema markup on a website. There are also developments on the horizon that might shake the search world.

There’s an adage that goes “there’s more than one way to skin a cat,” and while this author doesn’t suggest taking the saying literally, it can definitely apply to multiple processes on the internet – especially schema markup. Depending on your preference, there are three types of schema markup officially cited on schema.org. Each accomplishes the same goal in identifying elements of a webpage and having the potential to generate rich snippets. It’s all a matter of which version best meets your needs.

Microdata refers to a way to use already existing HTML elements like divs and spans to cite the different types of descriptive elements built into schema markup. The key here is the inclusion of the attribute “itemprop” to the HTML element. This type of schema markup is beneficial if pieces of your website already use these HTML elements to be separated on the page. This would mean that only the defining itemprop attributes would have to be added for the structured data to be recognized. See the example below to see how code would be altered from its original form.

RDFa is an extension to HTML5 that helps provide linked data similar to microdata. The difference with RDFa is that Open Graph Protocol (which is used by Facebook to integrate data) is based off of this type of markup. It uses individual tags like microdata, but uses different attributes. With microdata, we mentioned that you’ll use “itemprop” to denote different elements; but with RDFa, the “property” attribute is used. See the example below to familiarize yourself with what RDFa looks like when implemented in source code.

The final type of schema markup seems to be the most widely adopted due to the ease of implementation. JSON-LD is a lightweight linked data format that uses script tags. The benefit with using this type of schema markup is that all linked data for a certain subject on a webpage can be incorporated without altering live elements like divs and spans. Instead, all information is contained within the script for ease of implementation. JSON-LD’s quality of having everything in one place also makes it easier to dynamically generate structured data for larger Ecommerce websites that require many instances of schema markup. Google added support for JSON-LD back in early 2016, and use of this type of markup has exploded since then. See below for an example of what JSON-LD schema markup looks like in action.

The Future of Structured Data

In the short span of time between the first part of this series and this article, there were two developments in the world of structured data and rich snippets. First, JSON-LD breadcrumbs were officially supported by Google according to a Twitter answer from John Mueller. 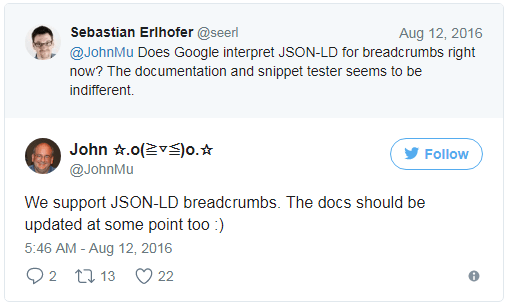 Then Google released their job search functionality right on the search engine results page. With this, webmasters can use the “JobPosting” schema property to denote details about their open positions to have them populate in this area. This helps businesses gain some great visibility for their openings right in front of the user on most job- or career-related searches. 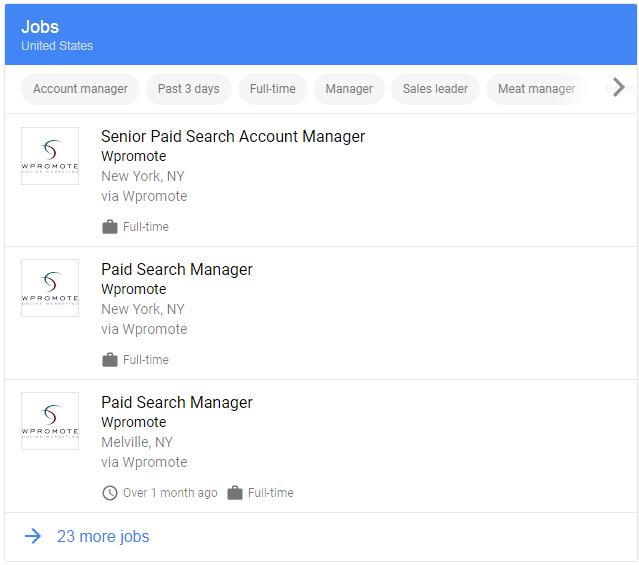 A little shameless self-promotion of our job postings in action.

These developments could not have made my point ring any truer. A word of advice for those moving forward: keep your finger on the pulse of the search engines and use markup at any hint they give you. Think back to the beginning of schema markup as a whole; in what other instances have multiple search engines (and competitors at that) joined forces to complete a project? That is on the level of Apple, Samsung, and Motorola joining forces to make a cross-operating system mobile app! With this much potential behind it, you had to know that markup language would make waves in the search world.

While Google has been rolling out rich snippets around various schema types for a few years, we’ve only scratched the surface so far.

According to schema.org, there are currently a total of 597 types, 875 properties, and 114 enumeration values in their database.

There are many more potential developments that can come from that available vocabulary, and that’s even before you factor in the open-source nature of schema’s database that allows it keep expanding.

Last but certainly not least, we’d be remiss to forget to mention the new hot up-and-comer in the search world: voice search. Phone-based assistants like Siri, Cortana, and Google Assistant, as well as home devices like Amazon Echo and Google Home, all currently rely on featured snippets to generate answers. It’s not out of the question to think that rich snippets generated from structured data could one day fuel the answers for voice search.

Structured data and schema markup are certainly here to stay. No matter which type you choose to add to your website, know that the work put in is totally worth the time – not only for the current state of rich snippets, but the for the potential future impact that will only continue to grow.

So get out there and get your markup on!

Girl Vs. Internet – In Plain Site: A Conversation About Site Design

Girl Vs. Internet – All About Backlinks