It was bound to happen eventually.Newspapers are dying out, and there’s probably not a lot you or I can do about it. Some people are even looking forward to the day when industry giants like The New York Times go under. Like Marc Andreessen.

Andreessen is the Internet entrepreneur who co-wrote the Netscape browser many moons ago, and since has moved on to greener and more modern, lucrative pastures, such as Flock. But as far as his vendetta against The New York Times, it doesn’t make much sense to me – is he simply bitter about the fact that they are holding on? That they raised their prices? Or is he really just looking for something to complain about?

Either way, when it comes down to the idea of doing away with paper newspapers, and viewing all of my news online, I am ambivalent. Yes, I know, ambivalence is rarely a compelling stance, but hear me out. On one hand, I am a writer who likes nostalgia, vintage clothing, and paper newspapers that get your hands dirty when you read them. On the other hand, I am an advocate of sustainability, going green, and conserving where we can – which certainly means cutting back on our use of paper products, especially newspapers that are often read once and then tossed into the trash, recycled if we’re lucky. Add to the mix the fact that I’m a quasi-techno geek who appreciates new technology, even if I don’t always use it, and the problem becomes even more complex. 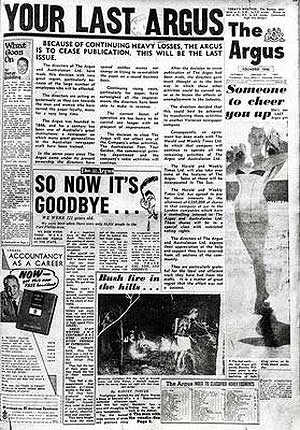 However, if the question is whether we should shut down newspaper production to conserve resources, the answer is clear. I would easily forgo some nostalgic comfort in an effort to do my part to save the planet. And if it is time for us to do away with paper newspapers, so be it. While there is something familiar and convenient about being able to grab a paper with my morning coffee, just because I can, and despite the fact that I read most of my news online, it is selfish and old-fashioned and consumerist – and I am ready to let go of the luxury that newspapers provide. Nevertheless, the issue at hand is not that simple. And if we stopped producing newspapers today, what would be the alternative?

We can already access much of the content we want online, on the go – and plenty of us are using laptops and PDA’s to do just that. And, while laptops and PDA’s were not designed specifically for reading, the Amazon Kindle is. Are wireless, handheld reader devices the wave of the future? Are sustainability concerns making once luxury items a necessity for anyone who wants to stay informed? Or, as has been predicted ad-nauseam, will the collapse of the paper newspaper make news and information a privilege of the wealthy class, available only to those with enough disposable income to buy a handheld reader, those lucky enough to have access to a computer? Yes, I know that technology is becoming less and less expensive, and that most of us reading this don’t have to worry.

But what about the guy on the street who has a buck-fifty left in his pocket at the end of the day and wants to read the news? What about the kid from a modest home who doesn’t have an Amazon Kindle or a personal computer but still knows how to read? What about the grandmother who is so used to reading the morning paper, it’s become the only thing she has left to hold on to in a cold and lonely world?

Okay, I’ll stop the dramatics – you get the point. Modernizing the way we receive our information is a slippery slope. What helps the planet and makes things more convenient for some widens the divide between the haves and have-nots – and we’re not talking about luxury cars or $4 lattes, houses in the Hamptons and Louis Vuitton bags. We’re talking about knowledge. We’re talking about information. We’re talking about news. And once commerce begins dictating who gets access to what information based on who can afford the latest wireless reader or a computer in their own home, we’re headed down the wrong path.

What is the solution? I don’t know. But maybe Google was on the right path with their wifi experiment in Mountain View. Maybe not. What do you think?

7 Trends to Watch in 2021, According to Digital Marketing Leaders

Performance Marketing Redefined: Unlock the Full Potential of Your Brand