It’s that time of year once again. Time to embrace the spirit of the season by breaking out your favorite sweater and settling in with a mug of cocoa. Think I’m talking about the winter holidays? Think again: in October, Halloween is always just around the corner. Whether you love letting bats come to roost in your autumn wreath or setting out a few spooky surprises for the little trick-or-treaters that will be swarming the streets in a few weeks, fall offers something for everyone. Check out a few of the great marketing campaigns that leading brands have implemented for some Halloween fun (and profit!).

Coke vs. Pepsi: A Halloween Throwdown

Some years ago, Pepsi ran a cheeky Halloween ad that directly referenced their biggest competitor, Coke. The ad featured a Pepsi can in a red cape that was very recognizable as the design of a Coke can (with some letters switched around to prevent any possible copyright infringement). Playful and tongue in cheek, the ad quickly went viral across Pepsi’s social media channels, primarily Facebook and Twitter where the campaign ran. 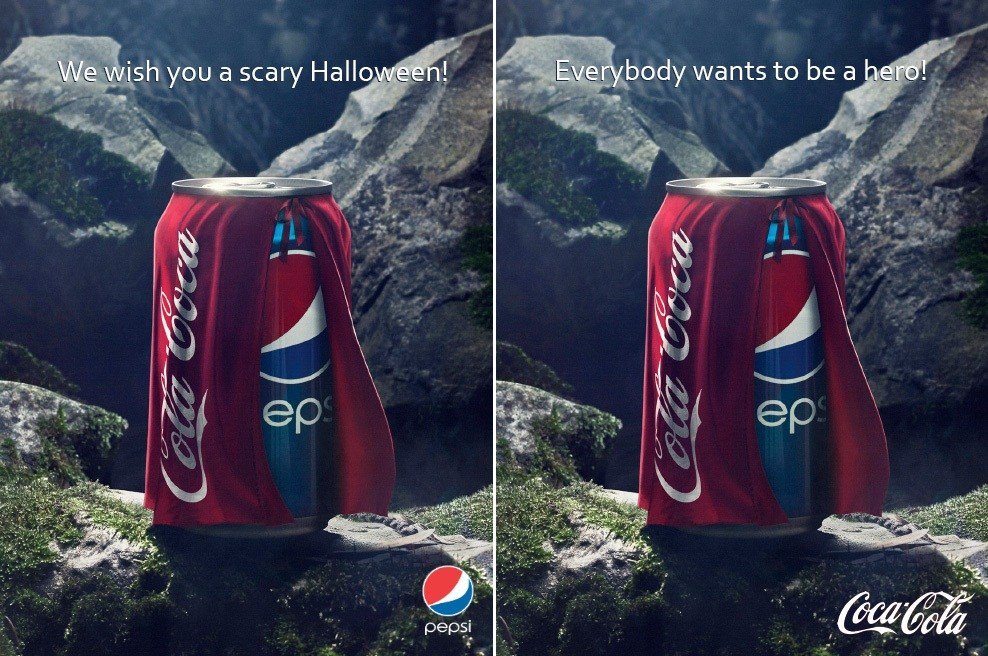 Coke reused Pepsi’s imagery to great effect in their tongue-in-cheek response to the original ad.

The unusual and refreshing approach paid dividends—and not just for Pepsi. An enterprising Coke fan created their own version of the ad, which immediately enjoyed its own explosive viral popularity.

Pepsi isn’t the only brand to use Halloween to poke fun at a major competitor. Last year, Burger King pulled off a masterstroke of native advertising with a quick ad that followed the pre-premiere of Stephen King’s “IT” in Germany. Just after the movie ended but before the credits rolled, two images appeared on the screen: one which instructed viewers never to trust a clown, and another which was simply Burger King’s logo.

The quick ad served as a bit of irreverent fun which prompted laughter and applause from the audience. It’s likely the humorous jab prompted a rise in both brand awareness and brand loyalty for Burger King at the same time.

Booking.com: Stay If You Dare

This clever bit of digital marketing from the minds at Booking.com took the fear factor to the next level. The booking website created a landing page which would help searchers find haunted destinations at which to stay all over the world, and boosted this landing page with creepy ads which challenged viewers to “stay if you dare.”

Featuring a genuine creep factor, the ad played to the sensibilities of Halloween thrill-seekers looking for a real scare from their holiday. The landing page also featured stylized horror movie posters for a select number of the haunted locations guests could choose from. While the landing page is now gone, you can still check out these cool posters for yourself.

Holiday Campaigns 2022: You Better Watch Out For New Performance Opportunities