I am what marketers would call “brand loyal” to very, very few products. A trip through the supermarket with me is a total crapshoot. When purchasing paper towels, I will almost always go with the cheapest option that isn’t quite as thin as tissue paper. When buying beer, I will reach for the Bud/Miller/Coors Light pack that I see first. When tossing toothpaste into my cart, I find that I’m a sucker for fancy packaging and little else.

But when deciding on deodorant, the decision, since high school, has always the same: Old Spice. 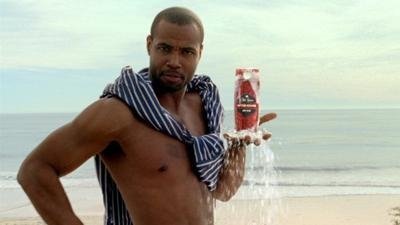 I never quite knew why I insisted on Old Spice. One might think that it’s because I like the scent but that can’t be right; I often forget which scent I prefer. I even have “Aqua Reef” in my bathroom at home and “Pure Sport” here at work (you never want to be smelly when meeting a client). Perhaps, I choose Old Spice for its performance. Well, I can’t imagine that that’s the case because I’ve never actually taken the Old Spice Challenge: “If you don’t like it you can call 1-800-PROVEIT and we’ll buy you a stick of yours!” That’s okay, Old Spice, the “stick of mine” would just be more Old Spice!

Deodorants, for the most part, are pretty similar. They serve two purposes: keeping you from stinking and projecting an image. Most deodorants can handle the first requirement, although I’ve heard (and smelled) that there are some exceptions. The second requirement is more difficult. Most deodorants don’t project much of an image at all, especially when you narrow the field down to men’s deodorants. The only two that I can think of are Old Spice and Axe. Perhaps that explains why Axe has been so successful at breaking into the market.

The Axe ad campaign follows the basic premise of all Axe products: if you use this product, the hottest ladies you’ve ever met will throw themselves at you with reckless abandon. It’s because of this image that I imagine that Axe is probably successful with young males but not as successful with my friends and I. Simply put, if I had a friend that used Axe deodorant, I would make fun of them, equating their use of Axe with a Hail Mary attempt at finding a girlfriend. I’d laugh; he wouldn’t.

Old Spice, on the other hand, has taken a different approach and, in my opinion, it has been the most successful marketing campaign of the year. By now, you should be familiar with the Old Spice Guy, whose commercial debuted during Super Bowl XLIV. If not, please enjoy this short commercial interruption:

The Old Spice Guy is better looking than I, stronger than I and seems to have an otherworldly hookup to diamonds and exclusive tickets that I can’t possibly compete with. But I don’t hate the Old Spice Guy; I freakin’ love him! He’s hilarious, his video is visually impressive and his recommendation that I use Old Spice seems somehow sincere and tongue-in-cheek at the same time. Most importantly, he makes me want to send the video to my friends. I know it’s a commercial but it’s funny and original enough to be passed along. I’ve actually TiVo’d through this commercial and rewound back in order to watch it again… for the umpteenth time. Does the commercial honestly make me think that I’ll end up a chiseled, distinguished, man of the world if I use Old Spice? No, but it doesn’t make me not think that!

Right away, the accessibility, the hilarity and the infectiousness of the ad made it a success. But the strength of Old Spice’s marketing efforts (online and off) didn’t stop there. Old Spice followed this ad up with an arguably funnier and definitely weirder quasi-parody of its own ad, directed by comedic daredevils Tim & Eric. Here is a sample:

Without pause, Old Spice delivered this new ad which leveraged the success of the original with an even zanier version. They made several versions and they all had viral success. As an interesting side note, both Isaiah Mustafa and Terry Crews, the men who played the respective Old Spice Guys, landed their own televisions shows after the success of the commercials: an unnamed NBC show and Are We There Yet? which has begun on TBS.

Most recently, the original Old Spice Guy (Mr. Mustafa) popped back up in the most interesting advertising development that I’ve seen all year. The Old Spice Guy posted videos responding to questions from his Twitter followers. Here is a sample response to a question asked of the Old Spice Guy by Alyssa Milano:

Think about the integration going on in this campaign: a character from a television commercial that aired during the Super Bowl whose videos have been viewed and enjoyed by millions, who has been playfully parodied by his own company in order to boost his image even further, made a Twitter account that was directly addressed by fans and celebrities alike has taken the time to address his fans’ queries via additional video content. Old Spice didn’t create a slogan or a jingle or even a mascot; they created a fully interactive human being with a personality stronger than most people you know and more engaging than most celebrities.

Think about it; who would you rather have coach your son’s little league team: a neighborhood dad that you don’t know, Alex Rodriguez or the Old Spice Guy? I’m leaning toward the Old Spice Guy and he’s not even real!

There have been similar successful cases. One that comes to mind is Dos Equis’ “Most Interesting Man in the World,” which was pretty much a ripoff of the Chuck Norris Facts website, which, itself, was a ripoff of the Vin Diesel Facts website. However, due to the innovation, interactivity and diversity of the Old Spice campaign, I would guess that it’s going to continue to be more successful and for longer than the Dos Equis campaign. Either way, these tactics are innovating the world of online advertising for the better. Some people may lament that we’re living in a world that seems more saturated by advertisements every day. That may be an inevitability but, if those ads can improve in value, making them entertaining to view and interact with, then that sets the bar higher for the rest of the marketing community.

In my opinion, the most successful ad campaigns nowadays aren’t the ones with the catchiest jingle or the coolest logo or the highest level of saturation; they are the ones that create personalities that people can enjoy and engage. Jack from Jack in the Box, the King from Burger King, the Cavemen from Geico, the Most Interesting Man in the World from Dos Equis and, of course, the Old Spice Guy lead the pack. They all have distinct, likable characteristics, genuinely funny ad content and, of course, an incredible online presence via videos, websites and social networks to engage their fans.

I’m not sure if these ads have solidified me as an Old Spice man for life but they sure help. What’s funny is that I didn’t remember that they were for body wash–not deodorant–until I began this article. I’m not particularly brand loyal on soap, but this campaign has definitely kept them at the top of the mountain for my brand loyalty on deodorant.

Wow, that does not sound like a mountain that anyone would want to camp in!