In the age of cord-cutters and mostly-mobile viewing, digital video development and ad spend is continuing to surge to meet consumer demand. Everyone wants their TV to go, tailored to their tastes, and readily available on all their devices. To stay competitive, advertisers will need to keep their fingers on the pulse of this rapidly evolving industry with an eye towards shifting their strategies as demand evolves and increasingly moves away from traditional pay TV models. As 2018 comes to a close, here are five important statistics from Q3, gathered by eMarketer in their “Q3 2018 Digital Video Trends” report, that advertisers should keep in mind as we go into 2019 and beyond.

While the rate in growth of US digital video viewers is gradually slowing, this is only because the total number is starting to reach saturation. According to Statista, US online user digital video penetration will reach 83.1% in 2020, and a total of roughly 250 million total viewers in 2022.

“By 2022, there will be 95.4 million people in the US who will have either cut the cord or never had traditional pay TV in the first place.”

While these numbers of course overlap with traditional pay TV viewers, this data demonstrates the total market dominance of digital video. Expect the number of digital video viewers to continue steadily growing, with the penetration very likely to someday pass 90%, a simply staggering figure.

Digital video ad spending has increased accordingly with the growth of digital video audiences. While traditional TV spending has stagnated and is even beginning to steadily fall, digital video spending has ballooned by leaps and bounds, growing by “double-digit rates” from roughly $28 billion in 2018 to $51 billion in 2022. This major shift is bringing along with it skyrocketing video ad revenues, especially on social networks. The lesson to take away here is that advertisers will need to be willing to raise their digital spend at least according to, but more likely ahead of, average market spend in order to stand out in an increasingly crowded field. 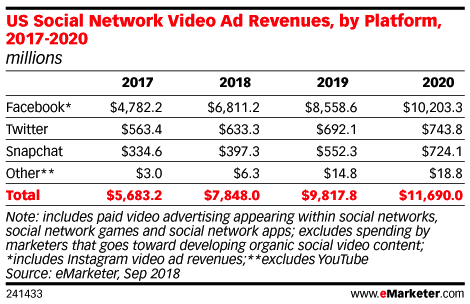 All digital video services are seeing rapid expansion, including content platforms such as Netflix, Hulu, Amazon Prime, and more. However, social networks such as Facebook, Instagram, Twitter, and Snapchat are experiencing the same high growth rates in both number of users and ad revenues on social video.

Of the social networks not including YouTube, Facebook demonstrates the strongest video ad revenue numbers, set to grow a whopping 50% between 2018 and 2020. However, Snapchat is on track to put that growth to shame with revenues projected to grow 82% by 2020. While the percentage change is not as dramatic for Twitter, the platform is still set to beat out Snapchat in total revenue. 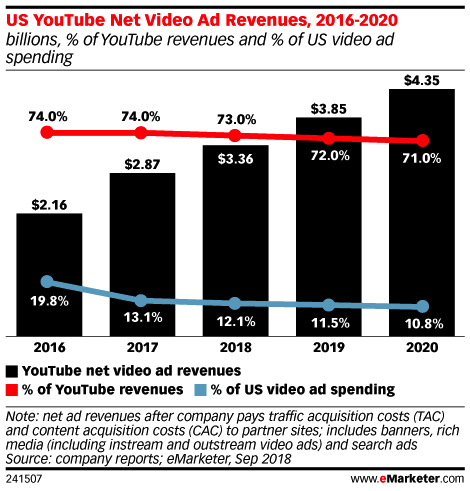 However, YouTube remains the unquestioned king of digital video and digital video ad revenues, with net video ad revenues surpassing a stunning $4.35 billion in just two short years in 2020. This is an increase of roughly one billion dollars from 2018, and while the overall percentage of YouTube revenues from ads is slowing, this is due to market saturation rather than any kind of decline. Ad revenue itself will increase nearly 30%, and ad revenue as a percentage of overall YouTube revenues will still increase by over 70% a year for the next two years. Growth of YouTube ad revenues as a percentage of all US video ad spending is also slowing, but for the same positive reason: increasing market saturation as YouTube audiences grow bigger than ever. 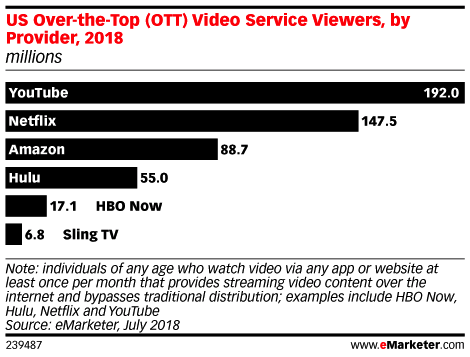 Far outstripping their closest competitor, Netflix, YouTube boasts roughly 192 million viewers in the US alone, making it the undisputed leader of over-the-top (OTT) services. OTT services are content providers of streaming media, and include all digital video streaming platforms, from Amazon Video to Hulu to YouTube.

International numbers, of course, absolutely dwarf these figures. eMarketer found that YouTube’s monthly viewers have leapt to 1.9 billion as of June of this year, up from 1.5 billion the previous year and surpassing more than a quarter of the total population of the planet.

The Future Of Digital Video

Ad-supported digital video is looking to undergo a renaissance in 2019. Both Amazon and Instagram will be launching new ad-supported video streaming services, named Free Dive and IGTV respectively. These new services represent bids on behalf of Amazon and Facebook to cut into YouTube’s market share, so expect some fierce competition for a niche which has so far gone largely uncontested, with other competitors like Vimeo unable to really make a dent in the massive YouTube user base. (Amazon’s Free Dive will remain separate from its existing subscription-supported Amazon Prime video service.) Marketers can expect a need to expand their digital video ad campaigns onto these new platforms in 2019 and beyond.

Best of the Blog: The Most Important Insights and Updates from 2022